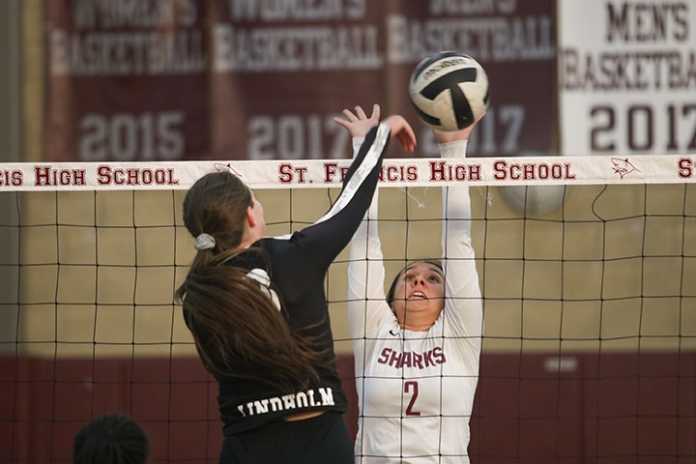 WATSONVILLE — The St. Francis High girls’ volleyball team began its Pacific Coast Athletic League Cypress season at home, which was the perfect scenario for a young team hoping to be a contender this season.

St. Francis senior Grace Kovacs returned to action after sitting out with an ankle injury. She said the defense played well as the game progressed, yet, it wasn’t enough to overcome an early deficit.

“I think we’re a very scrappy team and we can layout for the ball but the intensity is not there yet,” Kovacs said. “We’re a very young team but I think we’ll get there.”

St. Francis sophomore Natalia Ramirez is one of the rising stars that keeps getting better with every match. She said the team is made up of a new group of girls, which makes it harder to figure out the rotations.

“I think it’s a matter of getting used to it and feeling good about it,” Ramirez said.

St. Francis coach Guy Putnins said he had high expectations going into Wednesday’s match but realizes the team is still in a learning process.

“As soon as they feel like it’s out of their hands they tend to wear it on their face,” Putnins said. “They’ll learn in the future that there are times to battle back.”

St. Francis dropped down from the PCAL-Mission to the Cypress division after it finished with a 7-19 overall record and went 1-10 in league play last season.

Putnins said he wasn’t sure what to expect from Anzar. He said the Hawks are a much-improved squad and played well on Wednesday.

“We ran into a good team, that’s for sure,” Putnins said. “It was good. It shows us what we got in league.”

“The rest of the season, we feel like it’s only going to get better from there,” she said.

The Hawks were in control of the match for the most part but they had trouble closing out games due to silly errors.

“We’d be thinking about that and then it’d take us a minute to get back from that one thing,” Telford said. “But then once we got back we were back in it.”

The Hawks took care of business in the second set and looked to run away with the match in the third after going on a 6-0 run to make it 15-9.

The Sharks came within four points, 20-16, of Anzar but couldn’t force a fourth set, as the Hawks closed the match with a 5-2 run. “Everybody is still nervous and have the jitters,” Kovacs said. “I think we’ll get more into our team, be excited and wanting to win.”

Next up, the Sharks (1-4, 0-1) will host the John Bosco Invitational that begins Saturday.

M.V.C. coach Britta Blaser said she was pleased with the team’s energy, especially after starting the season with five straight losses.

Blaser said the front row was transitioning well and the squad showed a liveliness that was missing during it slow start to the year.

“I thought our defense moved really well and I think that fed into the energy of the whole program,” Blaser said.

“(Lebovitz) is taking off with the athleticism and plays all the way around,” Blaser said. “She’s been really, really great both offensively setting but also blocking and hitting.”

Blaser believes the win was a turning point for the Mustangs but said the players still need to work on communication and learning how to dig themselves out of hole.

“I think if we can clean up those little weird plays I think we’ll be able to play at a higher level,” Blaser said.

Up next, the Mustangs (1-5) begin Pacific Coast Athletic League Gabilan division play at Notre Dame of Salinas on Sept. 17 at 6:30 p.m.