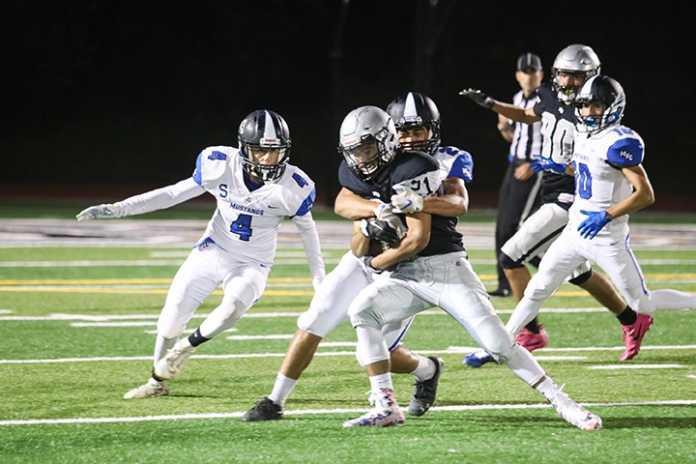 1. Aptos (0-2): The Mariners lost another heartbreaker at home against Oakdale but still remain at the top of this week’s PV Sports Power Poll.

Aptos will square off against Sacred Heart-Cathedral Prep, which was a Central Coast Section Division III semifinalist last year.

2. M.V.C. (1-0): Monte Vista Christian finally got to play its first game of the season last week and had no problem taking care of business against North Monterey County.

Up next, M.V.C. will play against The King’s Academy, which won last year’s CCS D-V championship.

3. Watsonville (1-1): The Wildcatz took a step back in a lopsided loss against Monterey.

Thursday’s game between Watsonville and St. Francis was canceled.

The Wildcatz will play against Burlingame on Sept. 20 at 7:30 p.m. in non-league action.

4. N.M.C. (1-1): North Monterey County sophomore Oscar Aquino got his first start at quarterback for the Condors and did a good job of handling the pressure.

Aquino connected with Riley Anderson for a touchdown but the Mustangs defense shut them down for the most part.

The Condors will travel to Scotts Valley to battle both the Falcons and the hot temperature set for 87 degrees at kickoff.

5. St. Francis (1-1): The Sharks bounced back with a big-time win against Yerba Buena.

Junior quarterback Davin Avila finished with two touchdown passes, while junior running back Pedro Valencia racked up a pair of touchdown runs for the Sharks.

The Sharks’ game against Watsonville on Thursday was canceled. St. Francis coach John Ausman said it was the right thing to do, especially with a roster that features just nine juniors and seniors combined.

6. Pajaro Valley (0-2): The Grizzlies struggled to get anything going in their road game against Soquel.

Pajaro Valley was held to just seven points, which didn’t come until the fourth quarter.

The offensive line needs to give starting quarterback Kevin Landeros some more time in the pocket.

Up next, the Grizzlies will face San Lorenzo Valley on Friday at 7:30 p.m. at Cabrillo College.