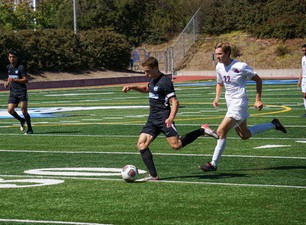 Pajaro Valley High senior outside hitter Julie Che led the way with a team-high 26 kills and 16 digs to help the girls’ volleyball team get past Anzar on Tuesday night.

The Grizzlies host St. Francis in PCAL-Cypress action on Thursday at 6:30 p.m.

Watsonville will play at Stevenson on Thursday at 6:30 p.m.

Alisal 5, at St. Francis 2: The Sharks won the top two singles matches in their loss at Pajaro Dunes on Tuesday.

Santa Rosa 2, at Cabrillo 1: Sophomore forward Ventura Garcia scored the lone goal for the Seahawks in their loss on Tuesday against the Bears in nonconference play.

Garcia scored in the 75th minute and sophomore forward Tanner Ruddy was credited with the assist.

Adrian Fontanelli scored an unassisted goal in the 51st minute. Shortly after Rigo Barragan scored in the 54th minute and Fontanelli was credited with the assists.

Sophomore goalie Carlos Salazar made four saves in 90 minutes played for the Seahawks (2-2), who host Modesto on Friday at 6:30 p.m.

At Cabrillo 2, Butte 0: Sophomore midfielder Clara Critchfield and freshman defender Kasja Johnson each scored a goal for the Seahawks in their win on Tuesday against the Roadrunners in nonconference play.

Sophia Magliato made three saves for Cabrillo (3-2), which plays at the City College of San Francisco on Wednesday at 4 p.m.

Staff Report - September 20, 2021
Two years ago Amy Thomas, principal at Watsonville Charter School of the Arts, noticed that her students were getting a bit restless during and...