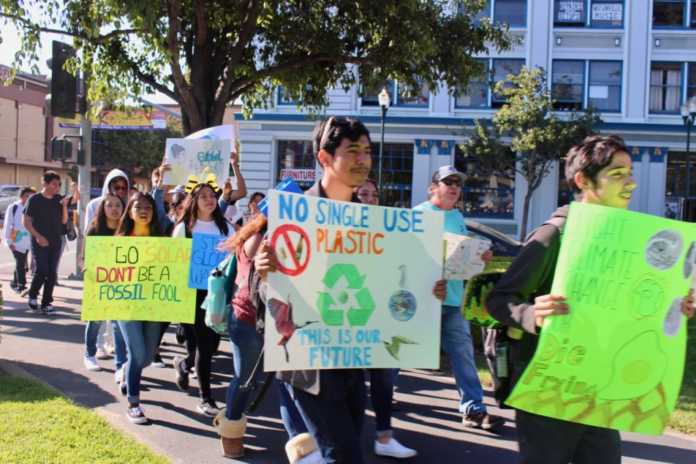 WATSONVILLE— On Friday young people around the world participated in the Global Climate Strike, protesting government inaction in addressing the climate crisis.

Hundreds of young people and adult supporters gathered in Watsonville’s City Plaza, holding up homemade signs with phrases such as “Make Earth Cool Again” and “Respect Existence, Expect Resistance.” They then took to the stage to speak their minds.

Pajaro Valley High School student Luke Zamora said he was there because he cared about his and future generations.

“We can’t just destroy the earth,” Zamora said. “That’d be horrible for our future. For our kids’ future. Sometimes I wonder if it’s even ethical to have kids—what would we leave them?”

Zamora was one of many students from PV High, Watsonville High School, Mt. Madonna School, Watsonville Charter School of the Arts and others to attend the open mic. A group of PV High students even made a “zero-emissions trek” on foot to the plaza from their campus across town.

“It’s important as a community to band together and demand action,” said PV High student James Raygoza. “Our future is at risk. People have to listen to us. This isn’t a joke.”

Students from Mt. Madonna School spoke about what they are trying to do to address the global climate crisis. (Johanna Miller/The Pajaronian)

The Global Climate Strike is meant to draw attention to the issue in the lead up to the United Nations’ Sept. 23 Climate Action Summit in New York City. Schools and business across the nation have seen people walk out of work and school to join the protests.

It was inspired in part by Swedish teenage activist Greta Thunberg, who started a global warming protest in August 2018 outside the Swedish Parliament. Her actions sparked the Fridays for Future movement, which has seen students leading protests every Friday.

Local organization Regeneración—Pajaro Valley Climate Action helped the students organize the Watsonville strike. Other environmental groups including Save Our Shores and Santa Cruz Rail Trail were present, as well as teachers, elected officials, religious and community leaders, to support the young speakers.

“Global Warming is real, it’s here, and no one is doing anything about it,” said Watsonville High student Alejandro Gonzalez. “People are afraid to speak their minds. We are inheriting a burden caused by the generation before us. We can’t let that go.”

Earlier in the day PV High students gathered in the school’s quad for a brief rally headlined by Watsonville Mayor Francisco Estrada and sophomore Itzel Sanchez, an outspoken environmental activist at the school.

Students also staged a “die-in,” a demonstration in which people lie down as if they were dead to symbolize the mortal danger posed by climate change. About a half dozen students wore makeshift hazmat suits, and others were dressed in funeral garb. Other students held signs — some reading “save our earth” — as they marched through the campus to the quad.

Ulises Lobato, a senior on the football team, was one of many students who laid on the cool concrete and allowed a peer to trace his body outline with chalk.

Several Pajaro Valley High School students were drawn out in chalk on the school’s quad during the planned “die-in.” (Tony Nuñez/The Pajaronian)

Lobato said he hoped the actions of schools and young people locally and around the world can raise awareness about the climate crisis and send a message to leaders that change needs to happen.

“I want to be a part of this community and be part of the solution,” Lobato said. “I want to help out people as much as I can, not just myself. [Climate change] hurts everyone.”