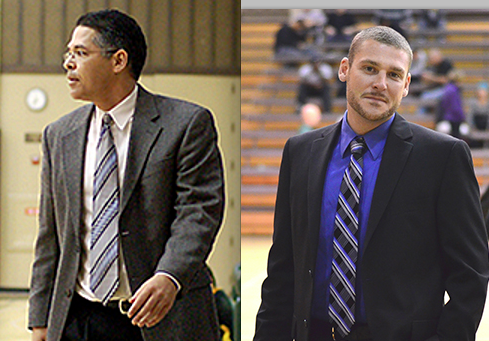 APTOS — Life is all about opportunities.

When Cabrillo College men’s basketball coach Tony Marcopulos was forced to take a medical leave earlier this season, he saw an opportunity for assistant James Page to get some experience.

Page knows how to make the most out of his opportunities.

After going 7-2 as interim head coach, Page handed back the helm Monday morning to Marcopulos with the Seahawks (9-3) riding a six-game winning streak that includes Sunday’s 77-73 upset of the top ranked City College of San Francisco Rams in the San Joaquin Delta Tournament final.

Last year, C.C.S.F. (14-1) swept Cabrillo in three meetings by a combined 48 points. But with Page leading the way, the Seahawks played arguably their best stretch of basketball to score their first victory over the defending state champions since the 2012 NorCal regional playoffs.

For Page, stepping in as the interim head coach affirmed his desire to one day step out on his own, potentially somewhere else in the state.

“The goal has always been to be a head coach,” Page said. “I expressed that to Tony when I got here first, and he has been grooming me for that… I feel like I’m ready, and I think Tony feels I’ve been ready. Maybe someone else around the state saw the same thing.”

After being cleared to return to coaching early on the morning of Dec. 14, Marcopulos elected to forgo traveling to Stockton with the team to respect the preparation and game plan Page and the players had developed all week.

Edwards, a 6-foot-9 big man from Gary, Indiana, was dismissed from the program by Marcopulos on the same morning — the first day of the tournament — for violating team policies.

Cabrillo Athletic Director Mark Ramsey would not comment further on Edwards’ dismal, but said it was unlikely that Edwards, who is still a student at the school, would be reinstated.

Sans Edwards, Cabrillo swept the tournament in Stockton, winning three games by a combined 35 points and halting the Rams’ 43-game win streak, which dates back to last season.

“This program is built in that mold,” Paige said. “Whether it’s Tony or me, we have a system in place, [the players] proved that. It’s shown their resiliency.”

Players feel there has been minimal disruption to the flow of the season despite the coaching carousel, and the loss of a key piece in Edwards.

“Everything that coach Page was doing was adding on to what coach Tony was doing prior to his stepping away,” said Cabrillo sophomore point guard Trey Whitley. “Their coaching styles are slightly different, but the basis is exactly the same.”

Page must return to the bench and re-embrace the role of assistant, at least for the time being, and aid Marcopulos in his quest for a state championship. It is a role that after seven seasons he is not unfamiliar with, nor is it one he dislikes.

In the past, several teams have expressed interest in giving Page a program of his own, but for now he feels content to wait for the right opportunity. As the Director of the Wellness and Education Center at Cabrillo College — a tenured tracked position — Page has the luxury of waiting for the perfect opening.

The time away did not come easily to coach Marcopulos, who has spent the last 20 years building a program that has consistently won conference titles and produced the conference M.V.P. in five of the last six seasons.

During his medical exile he was barred from watching games, attending practices and another basketball related activities.

“I got a little taste of retirement,” Marcopulos said. “I did not like it.”