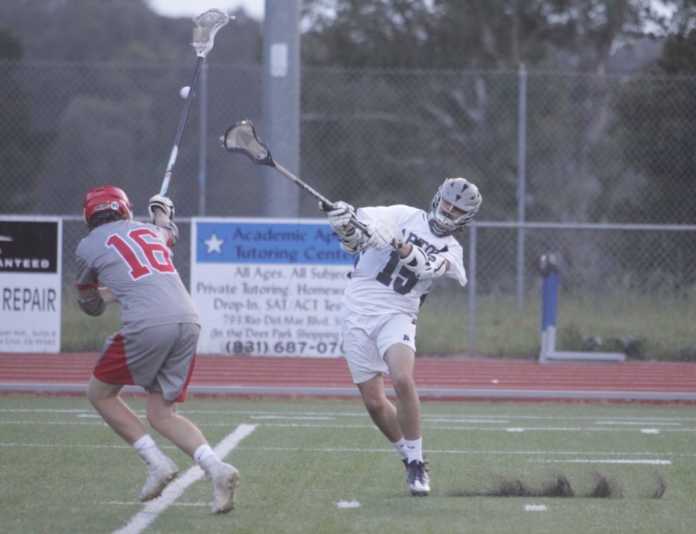 APTOS — It was suppose to be a tight, heated matchup between league rivals for the top spot in the Mission Trail Athletic League’s “A” division.

Aptos High exploded for six goals in the first quarter, including four in the first four minutes, and the Mariners’ stingy defense clamped down on Carmel High’s usually potent offense to take control of the league with a 15-3 blowout win on Wednesday night at Trevin Dilfer Field in Aptos.

The victory, Aptos’s sixth straight, lifts them into sole possession of first place in the MTAL-A at 6-2. With the loss, Carmel dropped into a tie for second place with defending champ Scotts Valley High at 5-3.

Aptos, which is 7-2 overall, has games against Stevenson High, Pacific Grove High and Salinas High before it closes out the season at Scotts Valley High on May 2. The Mariners have beaten all four teams during their current winning streak, which has them on the verge of clinching their first league crown since 2014.

“We’ve got a lot of confidence, but we’re trying to not get too ahead of ourselves,” said Aptos senior midfielder Jackson Carver. “Every team can hang with us, if they really want to.”

That wasn’t the case on Wednesday.

Playing for first place in the league and redemption from their last loss on March 21 in front of an energetic senior night crowd, Aptos surgically diced up Carmel in the first, third and fourth quarters.

The game got a bit chippy in the fourth after a Carmel player plowed through the screen of Aptos sophomore attack Blake Biscotti. Players from both teams mixed it up in the aftermath before cooler heads prevailed.

“It’s a good rivalry with Carmel,” Carver said. “We’ve never beat them like this. It feels really good.”

The Padres cut the advantage to three at the 8:32-mark of the third quarter, but senior attack Jack Hegerle scored a hat-trick over the next eight minutes to all but put the game to bed.

“After the end of the second quarter we lost momentum,” Hegerle said. “It’s kind of our thing. We get up a few points and we slow down. I got a little bit of luck with my goals. No goal is perfect, but it worked to get our team motivated.”

Patterson scored a pair of goals and made an assist, while Matthew Quinn, Kelly McGinn and Patrick Peoples also scored.

Matthew Morse, in his first season playing goalie, made seven saves, including a clutch stop at the horn before the half.

“The defense did everything,” Morse said. “They’re a huge part in making it way easier for me. They do a great job of taking the pressure off my shoulders.”

Morse made a save on the Padres’ first shot and mere seconds later Patterson dished to Quinn in transition for the game’s first score.

Aptos poured it on from there, and its defense pitched a shutout over the final 20 minutes.

“If we play like this,” said Aptos head coach David Rosenow, “we can’t lose.”

And the Mariners haven’t since they lost their first two games of the season. They were forced to forfeit their season opener against San Benito High, and suffered a heartbreaking 9-8 loss to Carmel. Since then, Aptos has been unflappable.

“We’re a better team than we were last game,” Hegerle said. “It was fun getting out here and wiping them.”