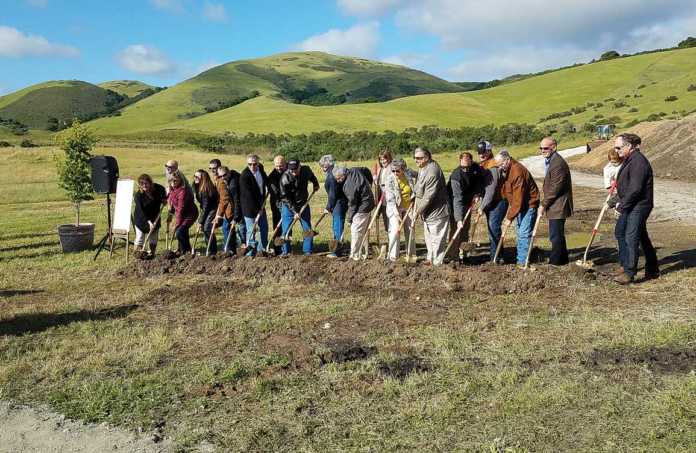 The Rancho Cielo Youth Campus was the site of a groundbreaking ceremony for the Ted Taylor Agricultural Center on April 8, with speakers including Bruce Taylor and John Phillips, founder of Rancho Cielo.

The day’s weather gave the organizers a few worries, having gone from sunny to rainy, but by the time of the ceremony it was blue sky with wispy clouds overhead.
First to speak was Rancho Cielo’s CEO Susie Brusa.

“Welcome to the long time in coming groundbreaking for the Ted Taylor Vocational Center,” said Brusa, to cheers from the audience. She went on to thank the families and businesses that helped make the addition to the campus a reality.

She then introduced Phillips, who talked about the impact the Rancho Cielo campus has had on the many youth that have attended the many programs there. Whether they go into the service field or into agriculture, the students have a greater chance of success on the job front and in life, Phillips said.

Joanne Taylor Johnson was next to address the group. She talked about being approached by Phillips, Don Chapin and others about naming the Vocational Center after her husband Ted, who passed away in 1991. In his lifetime, Ted Taylor had imparted his knowledge about the different aspects of the ag business to many people.

Taylor Johnson had at first said no, but soon after Ted passed she was presented with a list of 40 people who Ted had mentored, called the “Ted Taylor Alumni.” Knowing what Ted had done for those on the list and knowing what the new Agricultural Center would do for the young men and women who would attend, she said she realized it was a fitting tribute to Ted.

The Ted Taylor Vocational Ag Center will house four wings, each with its own purpose. Students will be able to study in the Automotive and Tractor Repair wing, or one of the other wings, which include the Metal Fabrication and Welding, Irrigation and Water Solutions wing, the Agricultural Value Added Services, Refrigeration and Food Safety wing or the Sustainable Construction Solutions wing.

The wings branch off the glass-fronted main building, which houses the main entry, lobby, a lounge and an office. Classrooms, offices and a conference room are housed on the second level of the building.

Bruce Taylor was the next to speak.

“These things are tough to get off the ground, they take a long time,” said Taylor to the amusement of the crowd, as the project took more than 10 years to make it to the groundbreaking stage.

“You have spent your life mentoring young people, and it’s a tribute to all of you,” he said to the men and women in front of him, many of whom contributed to the capital campaign that will fund the project.

Taylor added, “The money is terrific, that’s great. It’s really your spirit, your participation, your commitment to the community and to the benefit of our community for everyone’s greater good.”

To finish up the celebration, Don Chapin, chairman of the Board of Directors, took over to gather people around for the official groundbreaking of the project. First to the golden shovels were the many Taylor family members in attendance. The many generations of Taylors posed for pictures then dug the shovels in for the turning of dirt to start the project.

The next group ushered up to the golden shovels were the many donors and sponsors who participated in the capital campaign.