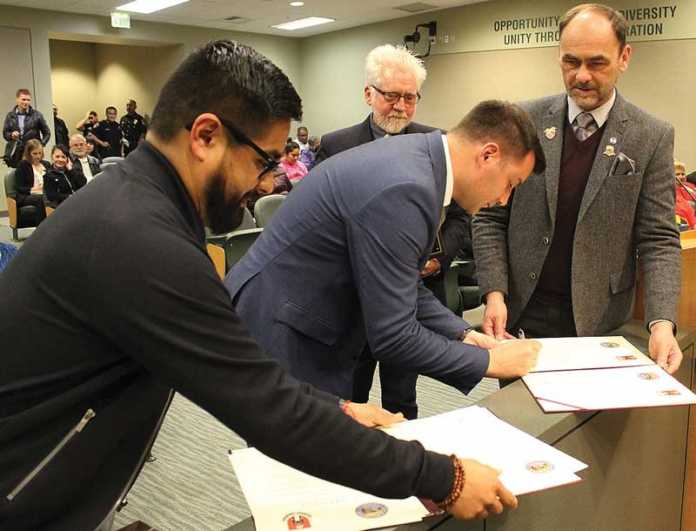 WATSONVILLE — The Watsonville City Council welcomed two dignitaries from Croatia on Tuesday as it established a sister city with Cavtat.

Cavtat is located along the Adriatic Coast in the county seat of Konavle, southeast of Dubrovnik. It is known as the urban center of Konavle, with a mild climate and large agricultural industry.

Watsonville Mayor Francisco Estrada said many families from that region immigrated to the Pajaro Valley in the late 19th century, where they helped build the apple industry here.

“The Pajaro Valley is a community that has many pillars, and one of those great pillars belongs to the Slavic Croatian American community,” he said. “Their history is now our history.”

Cavtat Deputy Municipal Prefect Ivo Radonic and Head of the Department of General Affairs Mario Curic will be in Watsonville for two weeks, where they have toured the police and fire stations, as well as Gizdich Ranch, S. Martinelli & Co. and Sambrailo Packaging, among other places.

Radonic said they “are very honored and pleased to be here.”

“There’s a real big historic connection circling our two communities,” he said. “Many of our ancestors from Croatia came here for a better life. They became proud Americans but with a strong connection with the homeland.”

During Tuesday’s meeting, Estrada and Radonic signed an agreement establishing the sister city relationship, and the two Croatian dignitaries were presented with a key to the city. Radonic and Curic also presented Watsonville with an embroidery from the Konavle region.

The two also attended a celebration at the Watsonville Civic Plaza on Saturday marking the 40th anniversary of the Slavic American Cultural Organization. The event was also a fundraiser for the organization’s Student Ambassador and Exchange Program, which sent its first group of seven students to Croatia in June.

The event raised about $25,000 for the student exchange program, Bulich Schnitter said, which was generated through sponsorships, a live and silent auction, and other donations.

“It was well-received, and everyone had a good time,” she said. “The venue was perfect.”

SACO’s roots stem from a Serbo-Croatian language class led by Nevenka Nocich Radic in 1978, which was attended by several Watsonville residents. That class eventually founded in 1979 what is now known as the Slavic American Cultural Organization, which boasts roughly 450 members in California and nationwide.

The organization hosts a number of events throughout the year, and presents scholarships to students, among other activities.

Bulich Schnitter said she has been a member of SACO since its inception.

“I’m very proud of our longstanding tradition in Watsonville and that we carry on some of our cultural background and share it with the community,” she said. “We need to be proud of our efforts, not just now, but the efforts of everybody that has contributed to the club over its 40 years of existence.”

Cavtat is the third sister city relationship Watsonville has formed in a year.

In July the council agreed to establish a sister city relationship with Jocotepec in Mexico, following another decision in late 2017 to forge a relationship with Tangancícuaro, a city located in Michoacán, México.