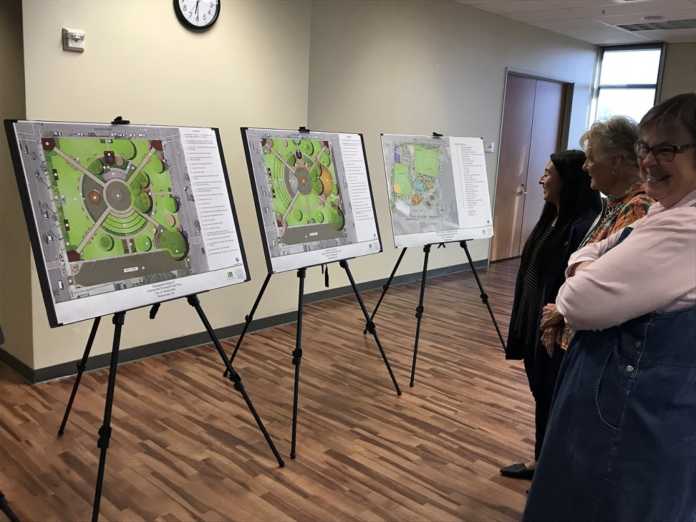 WATSONVILLE — The City Plaza’s historic elements are not going anywhere, not if Watsonville’s City Council follows the recommendation of the Parks and Recreation Commission from Monday night’s meeting.

The crux of their recommendation: keep the stone gazebo — often called the bandstand — at the heart of the community’s celebrated gathering place.

The commission also directed Verde Design, Inc. — the landscape architecture and civil engineering firm hired to create the plans for both the Plaza and Ramsay Park — to add a section of terraced seating, a small play area for kids, a permanent stage, several picnic and game tables and better lighting.

The updated layout for the Plaza and Ramsay Park will be presented to the City Council at its July 9 meeting.

That meeting is expected to draw a large crowd that has strongly pushed back against any changes to the Plaza’s makeup.

A petition to keep the Plaza as is has started to make the rounds at local gatherings, according to longtime community activist Alex Solano. And the Pajaro Valley Historical Association (PVHA) in a letter to this publication “adamantly” opposed changing the Plaza, saying the original deed gifted to the City of Watsonville by Don Sebastian Rodriguez in 1869 stated the land could not be used “for any other purpose whatsoever except solely and exclusively for the purpose of a Public Town Plaza.”

“Watsonville currently has 26 public parks covering 143 acres,” PVHA President Judy Doering Nielsen said in the letter. “Additionally, there are several miles of an extensive trail system with 29 points of entrance and 800 acres of fresh wetlands. The City Plaza is unique and needs to be protected and preserved, as is, for future generations.”

Solano, who last year was awarded Pajaro Valley Chamber of Commerce and Agriculture’s Lifetime Achievement Award, said he was in favor of keeping the Plaza in its current form.

“Any changes would change the culture of the Plaza,” he said. “We’re trying to save the culture.”

Watsonville’s Director of Parks and Community Services Nick Calubaquib said at Monday’s meeting that he would reach out to Nielsen before next week’s council meeting.

Three distinct plans for the Plaza consisting of several changes were shown at Monday’s meeting, but the commission created a medley with bits and pieces of all three, taking into account the results of community surveys and meetings from the last six months.

Additional community meetings are scheduled for the coming weeks and an online survey is still available for public input. Calubaquib has also welcomed specific feedback be sent his way.

All three concepts carried a price tag greater than $3.2 million.

Funding for the improvements would come from state-distributed grants provided by Prop 68, a $4.1 billion bond measure for parks, environment and water approved by voters last year.

The deadline for the first round of funding is sometime in August.

There is no guarantee Watsonville will qualify for funding.

The creation of the master plan for both parks is part of the department’s push to update its overarching Parks and Recreation Master Plan, which was first developed in 2009.

The Master Plan, however, was never realized for several reasons — the recession being the biggest — so the department decided to revisit the program this year and make adjustments according to the current direction of the City.

Ramsay Park’s Master Plan carried an estimated cost of $21.2 million. Included in the proposed construction: an expansion to the family center, a refurbishing of the soccer field, the creation of a multi-use (soccer & softball) synthetic field, an update to the Nature Center, a dog park and a pump track.