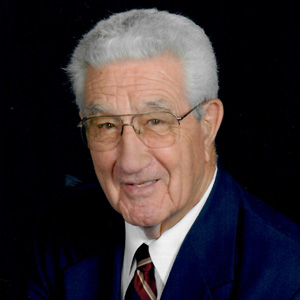 Paul William “Bill” Bachan died peacefully at home on June 15, 2017.  Bill was born at the family ranch in Watsonville on May 8, 1926 to Luke G. and Marie P. Bachan.  He attended Watsonville public schools and graduated from Watsonville High in the class of 1944.  At the age of seventeen, he enlisted in the United States Marine Corp.  After serving in the Pacific Theater during World War II he enrolled at Santa Clara University and received his law degree in 1951.
Bill married Karen M. Hansen after a three-year romance on June 20, 1950. They soon moved back to Watsonville to set up their home and begin raising their family. He practiced law in Santa Cruz County from June 12, 1952 through April 30, 2008.  He was the senior partner of Bachan, Skillicorn and Marinovich, and then became “ Of Counsel” with the firm of Allen & Allen.
Dedicated to public and community service, Bill was a past President of the Watsonville “20-30 Club,” served as Chief Assistant District Attorney 1956 – 1959, and he was a past President of the Santa Cruz County Bar Association.
Bill served on the Board of Directors of Watsonville Federal Savings and Loan Association and it’s successor Monterey Bay Bank from 1954 through 2001.  He served on the Board of Trustees of Watsonville Community Hospital, Santa Cruz County Community Foundation, and the Board of Fire Commissioners of the Salsipuedes Fire District.
He was a Life Member of the 32rd Marine Division Association, a Perpetual Member of the Marine’s Memorial Association, and The Military Order of The Purple Heart.
He served on the Santa Cruz Board of Education and on the Santa Cruz County Parole Board.  He was a board member of the Pajaro Valley Historical Association, and he served on the Landmark Restoration Corporation, which facilitated the restoration of St. Patrick’s Church after the 1989 earthquake.
As an avid hunter, he was active in Duck’s Unlimited and the California Waterfowl Association of which he served on the State Board of Directors for six years. Bill derived great joy through all his years of hunting with friends, his sons and grandsons.
Bill enjoyed playing tennis for many years and was a founding member of the Tennis Club of Rio Del Mar.  Besides the joy of sharing life with their four children, grandchildren and great – grandchildren, Bill and Karen enjoyed their four-legged family members including Black Labrador Retrievers, “Yorkies,” and a Papillon.
Bill was a member of the Knight’s of Columbus, and he and Karen are members of St. Patrick’s Parish.  One of his great passions was the San Francisco Giants.  His kids and grandkids loved going with their dad and grandpa to Giants’ stadiums to cheer on the “orange and black.”
Karen and Bill shared a love of travel. They explored the United States extensively, including annual trips to Hawaii with friends and family. Highlights include trips to Europe, Canada, South America, Mexico, and South Sea Islands.
Bill was a devoted husband and loving father, grandfather and great-grandfather.  He was predeceased by his parents, his sister Catherine “Kate,” and his brother Luke.  He is survived by his beloved wife Karen; his four children, Paul (Betty), Ginny (Scott) Taylor of Watsonville, Kris (David) Franceschi and David (Valerie) of Aptos. Bill also leaves his cherished eight grandchildren, Tina (Matt), Ryan (Andrea), Jaime (Patrick), Matt, Blane, (Kylie), Joel, Brad, and Jarred.   Bill and Karen have ten great-grandchildren, Avary, Kyalie, Gabby, Tiernan, Taylor, Jack, Cruz, Charlie, Brooklyn and Weston.
Bill is survived by his sister Allis Marie (Bob) McCormack of San Mateo, nieces and nephews, and by numerous beloved cousins including Joanna Jurich, Luane Vidak and Cathy Schimpler.
Bill was a loyal and true friend to many.  His generosity, care and willingness to help out when needed was deeply appreciated by all who knew him.
In lieu of flowers, donations are requested to one’s favorite charity or to the Marines Memorial Association, 609 Sutter Street, San Francisco, to the Pajaro Valley Historical Association, P.O. Box 623, Watsonville, to St. Patrick’s Church or to Hospice of Santa Cruz.
The family would like to extend their gratitude to Bill’s care givers including Lucy, the Visiting Angels, particularly Maureen, Roberta, Jennifer, and Crystal. Also, Hospice of Santa Cruz County provided much appreciated and caring end of life support to Bill and the family.
A Rosary will be recited at Mehl’s Colonial Chapel on Thursday, June 22 at 7:00 p.m. A Mass of Christian burial will be celebrated at St. Patrick’s Church in Watsonville on Friday, June 23 at 10:00 a.m. Burial will follow at Valley Public Cemetery.