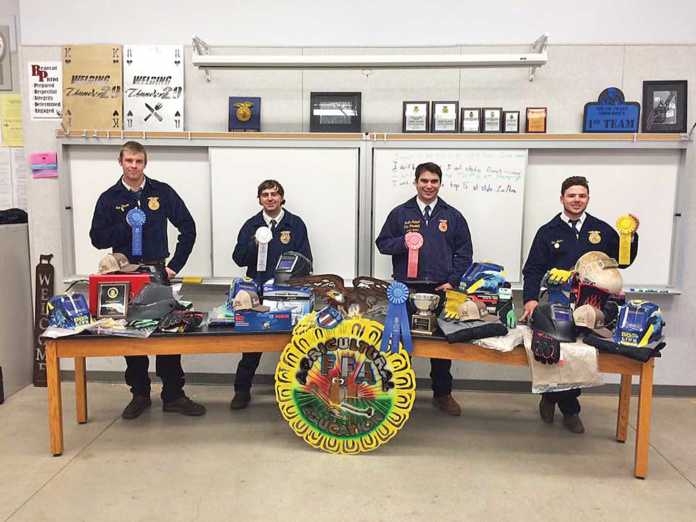 “This has been a truly remarkable year for these young men,” FFA advisor Justin Pickard said. “Their dedication to constantly improve their craft has been amazing.”

Students began practicing daily for the event after the end of winter break, Pickard said.

“Each practice was scheduled from 6 to 8 p.m., but realistically we were finishing up closer to 9 p.m.” Pickard said. “We have also been traveling heavily on weekends due to the number of FFA Field Days we went to this year.”

The PRHS team won each of the seven Field Day events — the last of which was on April 8 — along with earning consistently high individual rankings.

“The State FFA Finals were held in San Luis Obispo,” Pickard said. “Agricultural welding was hosted at Cuesta College’s main campus while all of the other FFA contests took place at Cal Poly.”

“The scorecard for the event was comprised of four areas: welding application (all of the welding rotations combined), written exam, weld inspection and portfolios,” Pickard said. “Of those contest subcategories, Paso Robles won all four.”

While the State Championship concluded the year’s FFA Welding Season, the PRHS FFA Welding Team still has a busy schedule to look forward to.

“Iver Hanser also participates in SkillsUSA and will go to the national competition in Louisville, Kentucky this June to represent California,” Pickard said. “We will be looking to build our next welding team prior to leaving for summer vacation this year and also plan to participate in the Welders Without Borders: Welding Thunder Fabrication Contest held in Arizona this October and I would like to have at least one practice build completed during summer break.”

The welding season may be over, but the lessons learned will last a lifetime.

“A lot of hands-on skills are developed through welding competition opportunities,” Pickard said. “They are directly tied to abilities and skills that can carry students into this industry while in high school or after. Currently three of the four students on the team work in industry related jobs and are looking at a variety of avenues where welding is their career choice. ‘Soft-skills,’ like dependability, arriving on time and prioritization, get developed, too.”

SONJA ESCHENBURG - January 25, 2023
SANTA CRUZ COUNTY—Writer Stephen Kessler has been named the 2023 Artist of the Year by the Santa Cruz County Arts Commission.  Kessler has written a...