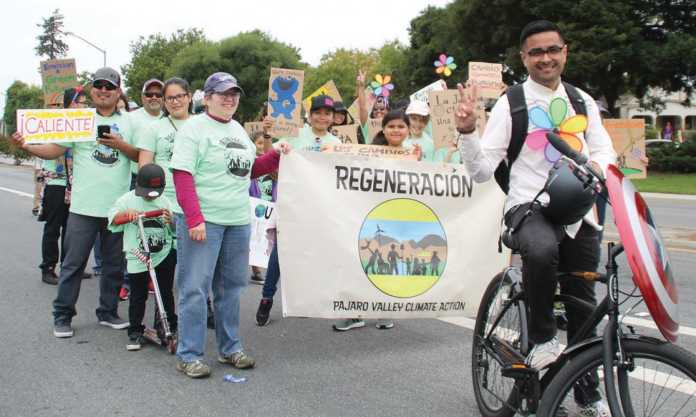 WATSONVILLE — Just a few years ago Nancy Faulstich and a small but dedicated group of Pajaro Valley residents were working out of her living room and garage hoping to start a grassroots movement to help fight climate change.

On Thursday Faulstich’s organization was at the center of Watsonville’s largest one-day gathering of the year.

Regeneración was selected by Watsonville Mayor Francisco Estrada as the community-serving organization highlighted in the Spirit of Watsonville Fourth of July Parade — a new tradition that took the place of the grand marshal designation of the past.

“It was a difficult decision because there were so many deserving organizations that impact this community, but their uniqueness really stood out to me,” Estrada said. “They’re doing great work… Anything we could do to get them more exposure is good.”

Estrada guided Faulstich and Co. through the parade while riding a bike with a live-size replica of Captain America’s shield.

“We’re really excited, honored and heartened that we were recognized for our fight for the preservation of life,” Faulstich said. “It’s wonderful to show that there’s a growing movement in the city to preserve life.”

Faulstich founded Regeneración in 2016 after multiple conversations with community leaders highlighted the need for a climate justice organization in Watsonville and the greater Pajaro Valley. Since then, the organization has slowly grown into a constant advocate for residents fighting with the impact of climate change in their community.

“I think what people tend to forget is that climate change is a human rights issue,” Faulstich said. “It’s effecting the people who don’t cause the problem — the poor, the farmworkers, the kids… We try to show them that they have a voice. We try to empower them.”

Regeneración over the last three years has helped spread awareness about the small everyday actions that residents can take to fight against climate change, such as eating more plant-based and locally-grown foods and reducing car travel. They also helped bring a mural to Rodriguez Street via a community paint day, and organized the Healthy Planet Festival and Climate of Hope summit.

One of the organization’s most striking projects, Estrada said, was a community-wide survey that helped other organizations understand the effects of climate change with residents from different backgrounds and social classes.

“They had a real emphasis in talking to people of color and I really appreciated that,” Estrada said. “It would’ve been easy to only talk to people who are easy to get ahold of, but they tried very hard to get a complete picture of the community.”

Faulstich worked as a bilingual preschool and kindergarten teacher for the Pajaro Valley Unified School District for 25 years before deciding to focus her full efforts on climate action. She said the younger generation has inspired her, especially kids from Watsonville High School and Pajaro Valley High School who have unrelentingly tried to lend their voice toward climate action.

She also said making sure her 10-year-old daughter, Rosemary, has a stable planet to live on in the near future is important.

“That’s what keeps me going,” she said. “Leaving a livable planet for the next generations.”

TONY NUNEZ - January 11, 2022
APTOS—Last fall, Cabrillo Gallery opened its doors to the public for the first time in 17 months. The annual “12x12: An Open Invitational” exhibit...