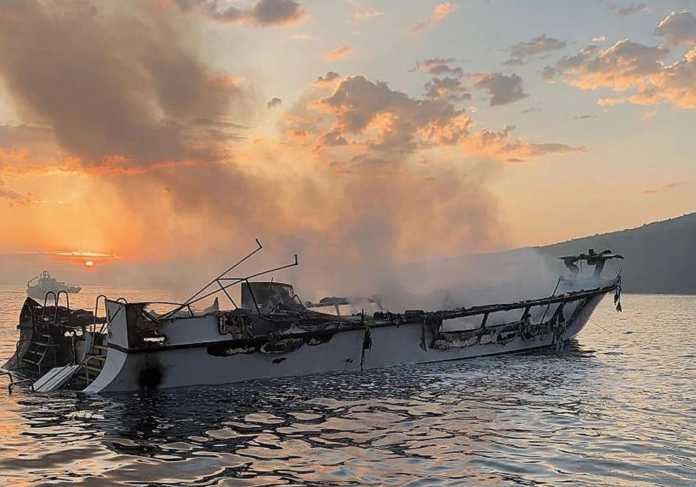 SANTA BARBARA — Emergency crews have suspended the search for survivors in the waters of Platt’s Harbor, one day after a dive boat caught fire, killing an estimated 34 people.

Several of the victims were part of a trip organized by Santa Cruz-based World Diving Adventures. Two of them were students from Pacific Collegiate School, along with two of their parents.

World Diving Adventurers co-owner Kristy Finstad was on board and presumed to be among the victims.

Out of 39 people who were aboard, only four crew members and the captain managed to escape and survive, officials said.

The cause of the fire has not yet been determined.

The U.S. Coast Guard and other emergency responders responded to a vessel fire off the north shore of Santa Cruz Island near Platt’s Harbor in Santa Barbara County around 3:30 a.m. Monday.

The first mayday call came from the “Conception,” and another came from a boat called the “Great Escape.”

When rescuers arrived they found “Conception,” a 75-foot commercial diving boat based out of the Santa Barbara Harbor, fully engulfed in flames.

The vessel sank to the ocean floor about 7:20 a.m.

As of 4 p.m. on Tuesday, 20 bodies had been recovered. Divers have seen from four to six bodies still in the boat, said Santa Barbara County Sheriff Bill Brown.

Still unaccounted are 14 victims, although all are presumed dead, Brown said.

Crews working the scene are trying to determine whether it is safe to bring the boat up, he said.

“This type of underwater search and recovery operation can be taxing and dangerous, with divers operating in 65 feet of water,” he said. “We want to make sure this process is done safely and methodically, so we appreciate the families and the public’s patience as the search continues.”

U.S. Coast Guard Capt. Monica Rochester said that rescuers using several boats and three helicopters have seen no signs of distress or debris in the waters, which led officials to stop looking around 9 a.m. after a 24-hour search.

“It is never an easy decision to suspend search efforts,” she said. “We know this is a very difficult time for families and friends.”

Brown said that officials will use “all necessary means” to find out what caused the blaze.

“(The families) will rely on us to do everything in our power to find out what happened aboard that vessel in the last moments of these family members’ lives,” he said. “That’s our commitment from the county of Santa Barbara.”

Numerous agencies, including the Los Angeles County Sheriff’s Office Dive Team and the Santa Barbara County Fire Department responded to the incident. The fire is being investigated by the National Transportation Safety Board.