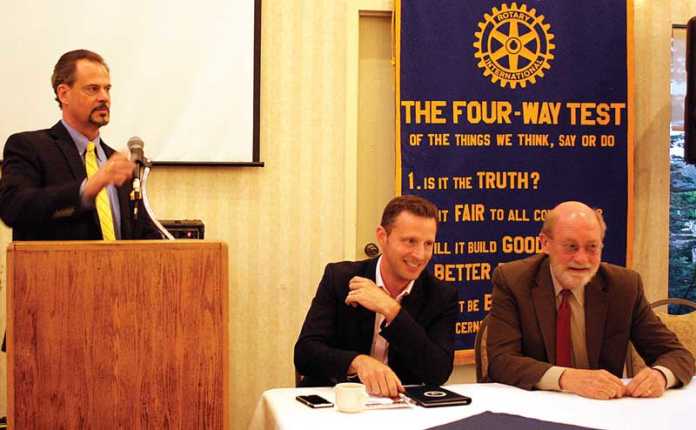 APTOS — Laughter filled the building as quip after quip, Supervisor Zach Friend sat through the stories, comic strips and one-liners “roasters” threw at him as part of Aptos/Capitola Rotary’s annual dinner Friday.

“There’s a lot of work that’s been going into it, and a lot more work that is going to need to go into it,” Potts said. “We are just really honored that the Aptos/Capitola Rotary chose us as the beneficiary for their annual roast.”

“I would steal a line that ‘no one ever stands so tall as when they stoop to help a child,’” Rotary President Al De Camara said. “A big part of Rotary is community service and funding deserving projects. I can’t think of any project more deserving than LEO’s Haven.”

And the Santa Cruz Playground Project hopes to have raised $1 million by the end of the year.

“For this event, it has the potential to getting us a third of the way to our goal,” Potts said.

And they may have done just that, with an anonymous $20,000 donor assisting.

“When I promised my kids that we would find a way to build an inclusive playground in Santa Cruz County, I knew I would need community help,” she said. “And so, here they are. They are here — they showed up and they are doing it with us.”

LEO’s Haven would provide interactive experiences for children ages 0-5 and 6-12. Playground designs include a sensory touch wall, replica farmer’s market, “wee-saw,” and accessible and traditional swings and slides from which to descend from the playground’s multi-level barn structure.

To date, numerous individuals, business and community groups have committed to helping fund LEO’s Haven. They include the Santa Cruz Warriors, Community Foundation of Santa Cruz County, local Rotary and Lions clubs and many more. For a complete list, visit www.santacruzplaygroundproject.org/our-community-supporters.