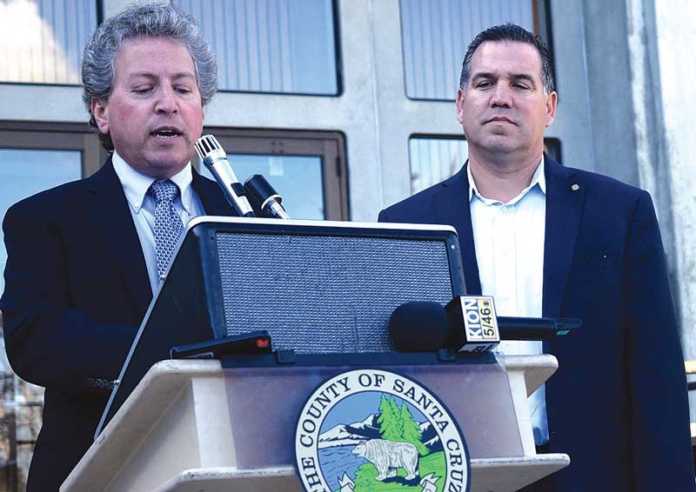 SANTA CRUZ — Political leaders from the County and City of Santa Cruz on Wednesday announced a lawsuit against 29 petroleum companies they say are the driving forces behind climate change and its destructive consequences.

“Today the county along with the City of Santa Cruz joined a growing number of communities standing up for residents in the face of mounting financial, environmental and public health costs tied to global warming,” Santa Cruz County Supervisor John Leopold said.

The suit, Leopold said, goes beyond the scope of previous similar lawsuits by seeking to hold the companies responsible for the drought, wildfires, extreme weather and other effects that are believed to result from global warming.

The lawsuits also seek damages associated with sea level rise, and for changes to water supplies.

“These suits seek to hold the companies responsible not just for the damage from sea level rise – something that represents an existential threat not just to Santa Cruz County residents and property – but our way of life,” Leopold said.

He pointed to the $139 million in damages caused by last year’s storms, and to the 29 miles of coastline in the county’s unincorporated area that is vulnerable to rising ocean levels.

Worse, the world’s petroleum companies have for 50 years ignored advice from their own scientists about the deleterious effects of their actions, and have worked to suppress and conceal the information, Leopold said.

“Big oil and coal has spent millions in a clear effort to sully the scientific discussion, while their internal documents recognize they were contributing to this catastrophe,” he said. “…The scientific case around climate change has been settled, an overwhelming number of scientists recognize that the climate is changing and that humans have played a significant role.”

In addition, more than 70 buildings, over a half mile of roadway, and more than two miles of water, wastewater and storm drain pipe infrastructure valued at $152 million is at risk.

The plaintiffs filing this complaint are represented by their respective county and city attorneys, and assisted by outside counsel from Sher Edling LLP.

In a prepared statement, the Chevron Corporation said that it welcomes “meaningful attempts to address the issue of climate change,” but criticized the lawsuit.

“These suits do not accomplish that objective,” the statement read. “The suits are factually and legally meritless. Reducing greenhouse gas emissions is a global issue that requires global engagement. Should this litigation proceed, it will only serve special interests at the expense of broader policy, regulatory and economic priorities.”

To see the lawsuit, visit www.tinyurl.com/y9nqmndj.