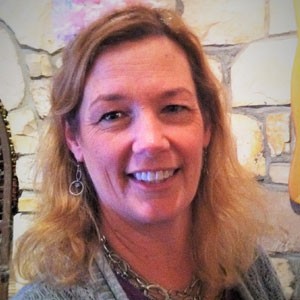 Sarah Kathryn Frost, recently of Monterey, passed away on July 23, 2019 at Salinas Valley Memorial Hospital following a brief illness and surrounded by her family.

Sarah was born on September 15, 1963 as the youngest child to Edward and Signe (Seena) Frost in San Jose, CA. The family moved to Watsonville in 1964 and Sarah and her siblings attended MacQuiddy Elementary School, E.A. Hall Middle School and Watsonville High School, where she graduated in 1981. Sarah attended Cabrillo College and San Jose State University (SJSU), receiving a Bachelor of Science in Occupational Therapy in 1992. She also received a Master’s of Science in Occupational Therapy from SJSU in 2002 and a PhD in Human Science from Saybrook University in 2011.

When Sarah was just 4 years old, she suffered a stroke and spent many months at Stanford Children’s Hospital and years of physical therapy to address partial paralysis of her left arm and leg. She always had a positive attitude and a big smile in the face of adversity. As a child and teenager, Sarah enjoyed time every summer at Easterseals Camp Harmon for children with disabilities—first as a camper and later working as a camp counselor. As an adult, Sarah used this wealth of personal experience to serve and help hundreds of children as an Occupational Therapist working for more than 20 years with the Monterey County Office of Education. To those who worked with her, Sarah was an awesome therapist and a loyal friend. She cared deeply for those she served and her determined, persistent manner made her a force to be reckoned with.

Sarah was an exceptionally kind and compassionate person and she had many friends from all the different phases of her life. She loved adventure and travel. After graduating college, she spent six months working at King’s College Hospital in London, while also taking time to explore England, Europe and Egypt, making many new and lasting friendships. Back home in California, she continued to stay close to her childhood and neighborhood friends and loved poolside weekends at Santa Nella. As she settled into her career, she fostered a new set of Monterey friends and colleagues who cherished her kindness, loyalty, and caring nature.

And Sarah was deeply loved by her family. She was an amazing daughter, a sweet sister, a fabulous aunt, and her absence leaves a huge hole in her family net. She has joined her Mom amongst the angels and has become a shining star in the universe. She leaves behind her father, Ed Frost, siblings, Jennifer Frost, Paul Frost (Cindy), and Meg Gorny (Doug), as well as several nephews and a niece.

A private cremation will be held at Soquel Cemetery and a Celebration of Life service will be held on Sunday, August 11, 2019 at 2pm at the Elkhorn Yacht Club in Moss Landing, California. Contributions in lieu of flowers can be made in her memory to Easterseals Camp Harmon or to the charity of your choice.