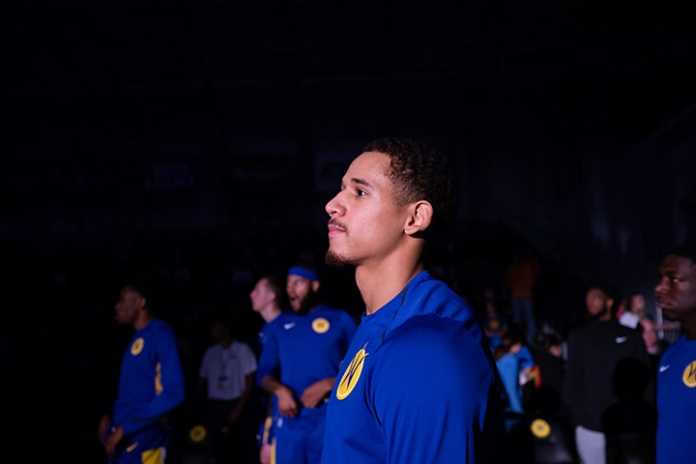 SC Warriors: Living out the dream

Once upon a time, Juan Toscano-Anderson played basketball for his local high school in a Latino neighborhood on 95th Avenue in East Oakland — just a short BART ride away from Oracle Arena in Oakland — and had the dream of one day playing on the same court of some of his NBA idols.

Toscano-Anderson now has the chance to turn that fantasy of playing for his “hometown” team into reality.

No, this is not a fairytale for Toscano-Anderson. But if it was, it would just be another extraordinary chapter to his long and ventured career.

“It’s hard to even put into words,” Toscano-Anderson said. “I just showed up to the practice facility and I’m still in awe just being a part of the organization that I grew up rooting for.”

Toscano-Anderson played in 43 games, averaging 24.4 minutes and 7.2 points and per game. He also shot 43.6 percent from the field and 34.9 percent behind the arc.

Toscano-Anderson is one of three players on the Warriors along with Andrew Harrison and Devyn Marble to sign Exhibit 10 deals.

Exhibit 10 deals are for players who will receive a bonus of up to $50,000 if they sign a contract with the team’s G League affiliate upon being waived from the parent club.

The roster also includes a non/partial guaranteed contract with Alfonzo McKinnie and two-way contracts with Damion Lee and Ky Bowman. Plus the three Exhibit 10 deals.

Toscano-Anderson now has a chance to make an impression and earn a spot on a team that used to play in his backyard.

Starting next season, Golden State will be playing its games across the Bay Bridge at the Chase Center in San Francisco, but Toscano-Anderson says the Warriors are still the Bay Area’s team.

Toscano-Anderson added a valuable presence on the court during his time with the Santa Cruz Warriors.

“(Toscano-Anderson) is always going for the ball, he’s always looking for the rebound and he hustles,” said Santa Cruz general manager Ryan Atkinson. “Defensively he has a skill that you can’t teach.”

About two years ago, Atkinson received a phone call from Jabari Brown, who played for Santa Cruz last year and is also an Oakland native. Brown told Atkinson that he had a friend, Toscano-Anderson, who wanted to try out for the team. But, Toscano-Anderson had to wait until September.

Atkinson said Toscano-Anderson had a couple of deals on the table to play in Mexico, where he first began playing professional basketball.

“(Toscano-Anderson) honestly believed in himself and he turned those deals down,” Atkinson said.

By signing a training camp roster contract, Toscano-Anderson is put under the affiliate player rule, which allows teams like Golden State to retain players it waives in training camp.

If Toscano-Anderson does not make the Golden State regular season roster, it will allow him to rejoin Santa Cruz for a second season.

Santa Cruz Warriors coach Kris Weems said Toscano-Anderson is a player full of energy, a great teammate and always looking out for other guys on or off the court.

“(Toscano-Anderson) knows how to make plays for other guys and he’s working on shooting every day,” Weems said. “It’s the kind of guys you really enjoy coaching.”

Weems, like Atkinson, said Toscano-Anderson’s defensive ability to guard four positions at any given moment makes him a versatile player.

“You don’t feel uncomfortable when he’s guarding point guards out in the space,” Weems said. “He’s good enough and quick enough to do it.”

At Castro Valley High, Toscano-Anderson led the Trojans to the most wins in school history with a 30-2 overall record. He also helped lead the program to its first league and sectional title, averaging 17.4 points and 6.9 rebounds per game that season, according to MaxPreps.

Toscano-Anderson spent time with the Mexico national team. He has some deep roots in the culture with his mom, Patricia, and her family coming from Chavinda, Michoacan.

“Being able to represent a whole country is inexplicable,” Toscano said. “You go anywhere in the country and people know who you are and that’s really cool.”

Toscano-Anderson said it meant a lot to his family, especially because they’re from Mexico and still have family south of the border.

Toscano-Anderson said Mexican people are very prideful people,  just like other nationalities or cultures, and his family took joy in him playing basketball in their own country.

“Just seeing how proud my family is that I get to represent not only them but our country as well, it’s really cool,” he said. “It comes with a lot of responsibility and expectations but I wouldn’t trade it for the world, it’s a cool experience.”

Despite growing up in a Latino community and a Spanish-speaking household, Toscano-Anderson said he wasn’t fluent in the language. It wasn’t until he started playing professionally in Mexico that he dedicated himself to learning Spanish so that he could fit in.

It took him about a year to become fluent.

“Despite me being born in the States, I consider myself Mexican,” he said. “I just wanted to grow in all aspects of being Mexican and being part of the culture.”

Weems said as a coach it’s been a cool experience getting to learn another person’s culture and their background. He didn’t know Toscano-Anderson outside of vague AAU basketball memories.

“The fact that he got to represent the Mexican national team and we’ve had several other players from different countries… It’s pretty cool to see the NBA is a big melting pot, a lot of different cultures represented,” Weems said.

Toscano-Anderson said he’s grateful for everybody that’s helped him along his journey and stresses that he doesn’t forget about anybody that’s been there for him.

“Even though I don’t have the platform to thank everybody individually, they know who they are and I’m just very appreciative of them,” Toscano-Anderson said.

Toscano-Anderson put in his time in both Mexico and Santa Cruz. Now the Oakland native has an opportunity to add another chapter to his fairytale career.

“I’ve grown up watching this team from their low points to them winning three championships,” he said. “It’s a dream come true. Anybody who’s ever accomplished a huge goal or dream of theirs, they can understand how I’m feeling. I’m just all smiles every day.”

Editor’s Note: This article will be published in the Sept. 20 edition of The Pajaronian.