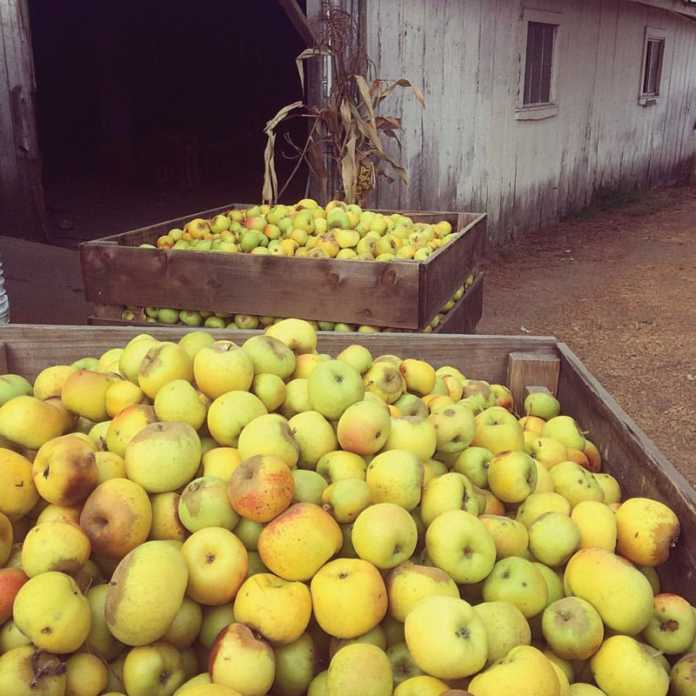 Sharing in the harvest

Apple season has started, and Pajaro Valley apple trees are bending under the weight of the fruit. In some fields, orchard workers have had to construct support beams so that branches do not break off, spilling the fruit to the ground.

This is one reason why Santa Cruz Cider Company is offering a place for residents to drop off their unused apples and other fruit. The company plans to blend and ferment the donations into a one-of-a-kind community cider.

“We know some people have a lot of apples—maybe more than they can keep up with,” said owner and cidermaker Nicole Todd. “This could be a fun solution.”

Santa Cruz Cider Company has been brewing hard apple cider since 2013. While they have been utilizing Pajaro Valley orchards, their headquarters was until recently in the West Side of Santa Cruz. This summer they opened the new Apple City Cidery and Tasting Room in Watsonville.

The community apple bin, which will be open until Oct. 26, has been a long time coming.

“This is something we’ve wanted to do for years,” said Natalie Henze, Todd’s sister and co-owner. “But we never had the space until now.”

Henze said they are taking all types of apples, but especially crab apples, as they are best for making hard cider. They are also accepting pears, quince and medlars. While the fruit can be bumpy with small scabs, resetting and minor bruising, none can have rotten spots.

Participants must harvest their fruit.

“Basically, we want all your apples you wouldn’t want to eat,” Henze said.

The blend, dubbed the United Neighbors Community Cider, will be released late this year or early next year.

Donations will be accepted in a large white bin in front of the Apple City Cidery and Tasting Room, 65 Hangar Way. Contributors are asked to fill out a form (available near the bin) so they can be contacted when the cider is ready.

On Oct. 26 from 12-6 p.m. guests can be part of the pressing crew. Once the fruit is pressed and fermented, crew members will be given bottles at a discount price.

Guests will have a chance to use this old-fashioned apple press on Oct. 26 to create a hard cider. (Contributed photo)

All proceeds of the United Neighbors Community Cider will be donated to a local non-profit organization, which will be announced at a later date.

Henze said she is looking forward to seeing the results.

“It should be an interesting cider,” she said. “We’re excited to see how it turns out.”

For information about the community apple bin email [email protected] or call 288-7049. Visit the Santa Cruz Cider Company online at santacruzciderco.com, or follow them on Facebook or Instagram at @santacruzciderco.