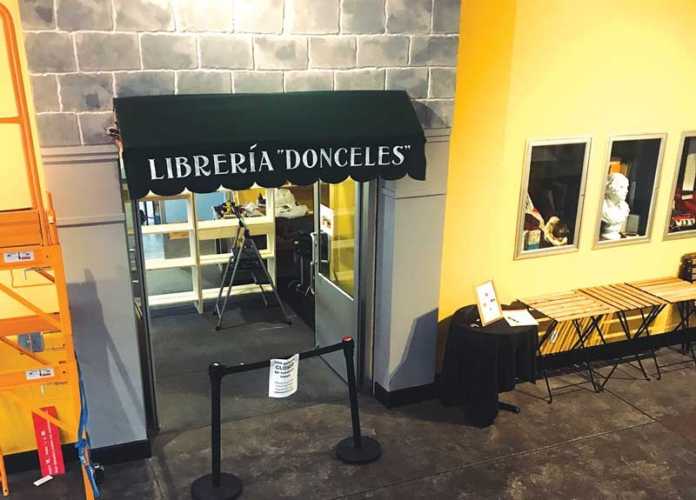 SANTA CRUZ—The Santa Cruz Museum of Art & History (MAH) is home to a new exhibit unlike anything it’s hosted before.

“Librería Donceles” first opened at a New York gallery in 2013. It has made stops in 13 different cities before landing in Santa Cruz. The exhibit consists of thousands of Spanish language books, meticulously set up as a working used bookstore, where gallery patrons can browse and make purchases.

This is Santa Cruz County’s only bookstore that offers solely Spanish language texts.

Artist Pablo Helguera was inspired to create “Librería Donceles” out of a desire to bring back small bookstores, as well as serve the growing Hispanic and Latinx communities in the U.S.

“There is a big lack of Spanish literature in this country, which is strange, as it’s the second most popular language after English,” Helguera said. “Having a place like this… fills such big role, especially for communities like [Santa Cruz County].”

The exhibit’s title refers to a well-known street in Mexico City, where bookstores and other similar businesses abound.

“[Mexico City] has this really interesting, exciting urban area where each street has a specialty—from suitcases to electronics,” Helguera said. “Then a street near a cathedral, tucked away… is a street full of bookstores. It’s amazing.”

“Librería Donceles” is made to look like one of these storefronts. The layout within changes city-to-city, however, since each museum space is unique and presents different challenges.

“I don’t think people realize how much really goes into it,” Helguera said.

“There are a lot of pieces that go into something like this,” Ford-Terry said. “We’ve seen a lot of versions of [‘Librería Donceles’] through photos. Pablo and us worked to find a way for it to fit in this space.”

Ford-Terry also touched upon the important role of bookstores in a community.

“Bookstores are a gathering place, where people can meet, sit and read,” they said. “Especially for the Spanish-speaking people in our community, having a place like this is really important.”

Helguera began gathering and receiving donated books in 2013, and over time “Librería Donceles” grew from a small exhibit to a much larger project.

“Word spread,” Helguera said. “There’s been a strong response in every city. I think it’s wonderful how people are embracing the idea.”

The exhibit includes everything from old novels to cookbooks. A retired lawyer even gave Helguera his entire collection of law texts.

“Many of these books are difficult to find in the U.S.,” he said. “Some are from publishers that no longer exist, others are very specific to readers in Mexico.”

Book sales in “Librería Donceles” are set as “pay as you wish.” All proceeds of these donations support the Young Writers Program, an organization in Santa Cruz County aiming to support students in their writing.

MAH will also be offering resources to other places in the region where Spanish-language texts are available.

“We strive to be an important part of this community,” Ford-Terry said. “This kind of exhibit especially is how we build that relationship.”

“Librería Donceles” is now open and will run until July 2020.