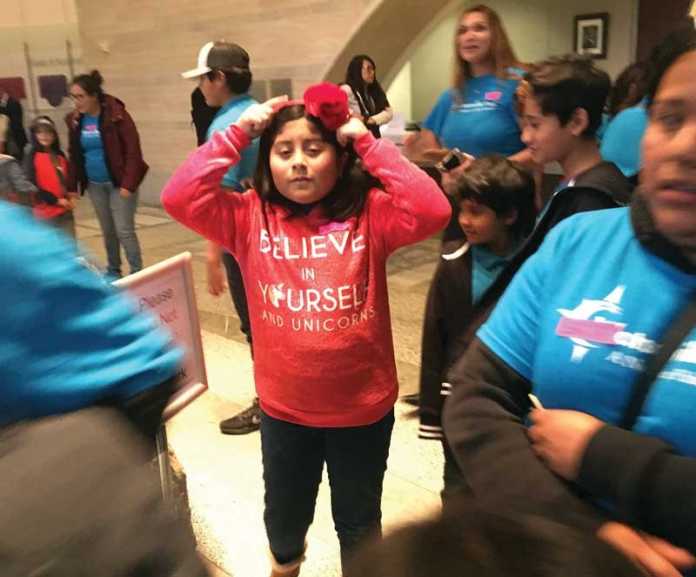 SACRAMENTO — California’s top education officials on Wednesday approved the charter petition of a school that was previously twice rejected in Santa Cruz County.

The decision by the California State Board of Education will allow Watsonville Prep School to start operating in August.

Navigator Schools, which will operate the charter, plans to start with 180 students in kindergarten through second grade, and add one grade per year until it has an eighth grade. The school’s charter calls for a total of 420 students when fully operational in 2023.

The hours-long hearing drew hundreds of teachers, administrators, school workers and parents who came to speak both for and against the school.

The Pajaro Valley Unified School District Board of Trustees denied Navigator’s 749-page petition in May.

The charter organization then appealed to, and was rejected by, the Santa Cruz County Office of Education Board of Trustees in August.

Still, dozens of parents and teachers who work at Navigator’s other schools had high praise for the organization.

Gabriella Roldan, a teacher at Hollister Prep, said Wednesday that she owes her own success to her time at Gilroy Prep as a student.

“Our students are being shown that college is in their future,” she said.

Vanessa Castañeda, a teacher at Gilroy Prep, said that, “Navigator is the foundation for the education I wish I had growing up.”

Navigator officials have long promised to bring new educational options to South County, an assertion that many PVUSD teachers and officials have rejected.

“PVUSD already has charters that do the job, and that have the oversight of the (PVUSD) school board,” said PVUSD teacher Julie Armstrong. “We don’t need what Navigator has proposed to offer.”

Pajaro Valley Federation of Teachers grievance officer Sarah Henne said that it would be “practically impossible” for Navigator to deliver what the district and its Special Education Local Area Plan already does.

Also a concern for PVUSD is the loss of average daily attendance funds to the district.

According to district Superintendent Michelle Rodriguez, the new school in its first year will serve 180 students, at an annual cost of $10,000 per student. By the 2023-24 school year, Watsonville Prep will be drawing an estimated $4.2 million annually from the district’s general fund.

In addition to guaranteed ADA state funding, WPS also has reported several start-up grants, including $2.1 million from the Charter School Growth Fund, “up to” $800,000 from the Silicon Schools Fund and $325,000 from the Walton Family Foundation.

Rodriguez stressed that it was not financial concerns that drew her to Sacramento Wednesday to speak out against WPS’s charter petition.

Instead, Rodriguez said that she is worried about the nonprofit organization’s ability to serve the diverse needs of PVUSD.

“I continue to be concerned about their understanding of our community’s needs,” she said.

As an example, Rodriguez pointed to a lack of transportation plan, leaving students who live outside the city limits without a way to get to Watsonville Prep School.

Navigator’s charter petition also did not adequately address the needs of migrant students, Rodriguez has said.

Many of the people speaking against the charter school also worried how PVUSD will house the new school.

PVUSD Director of Maintenance, Operations and Facilities Victor Sandoval told the board that the district’s buildings are already at capacity, and that a current housing development in Watsonville will further aggravate the problem.

The district is already beset by limited space, with many teachers forced to push their supplies on carts because they lack classrooms.

Under Proposition 39, school districts in California must provide space for charter schools located within their boundaries.

Navigator has asked for six classrooms, in addition to an office space. The district has until Feb. 1 to make an offer.

Rodriguez said that current PVUSD students will be affected as little as possible.

“I will not be moving our students in order to provide them space,” she said.

Navigator CEO Kevin Sved said that Navigator is seeking long-term facilities, and that the organization is being “aggressive” about finding a location.

“We are confident we will get a fair offer for the first year, but we are seeking other options for years two, three and four because we don’t want that to be a long-term challenge,” Sved said.

It is not yet clear where the district will place Navigator’s classrooms.

Navigator Director of Community Outreach Kirsten Carr said that it is considering several sites throughout the city, but declined to say which ones.

The school will also prepare for the lottery selection system, which will start in April, Carr said.

“We are thrilled to be able to open Watsonville Prep in August 2019 for the families who have worked so hard to make it a reality,” Carr said.

After hours of testimony, opponents’ concerns were not enough to convince the CDE trustees to deny the petition.

State education code offers very limited criteria by which to reject charter petitions. State law does not allow boards to deny petitions based solely on financial concerns, for example.

CDE board member Trish Williams said that state law required the board to do a “de novo” review, or to look at it with “fresh eyes.” The board could not consider previous rejections by PVUSD and SCCOE.

“It’s not a decision to overturn a previous decision,” Williams said.

“Make no mistake, this will have a significant impact on the students and workers of PVUSD, and there will be very little we can do about it until we fight back against the well-funded corporate charter school lobby and take back our schools,” the post read.

PVUSD Board Trustee Kim DeSerpa agreed, saying that the CDE by law cannot consider the financial impact on school districts when considering charter petitions. Instead, the decision must be based solely on whether the charter offers a sound academic plan.

Based on that criteria, DeSerpa said that PVUSD would be powerless to stop other charter organizations that want to establish a school.

“I do feel like this particular policy is assisting in dismantling public education,” she said. “I’ll be trying to work with our state reps to change the law.”