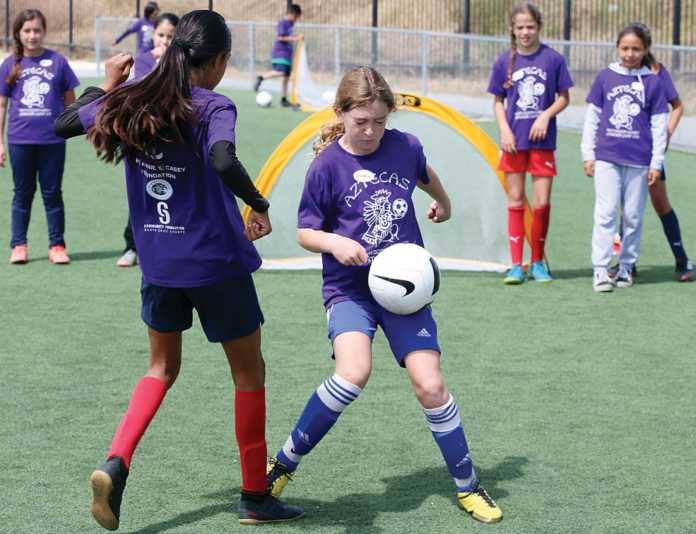 PAJARO — A popular soccer summer camp program was saved from being slashed in half this year after a nationwide charitable organization stepped in to fund it.

Dozens of young soccer aficionados were at Pajaro Park Wednesday morning, learning the finer points of the game as they ran drills, practiced their moves and played games.

All of this was part of Aztecas Summer Soccer Camp, a program created five years ago to give low-income kids age 6-14 a constructive summertime activity.

The program has grown in popularity, and always has a waiting list of kids hoping to score a spot in one of two coveted weeklong sessions.

But the camp was nearly reduced to just one session this year after local funding dried up, said program founder Gina Castaneda.

The potential cut was upsetting, Castaneda said because the camp gives young people — both the teenaged trainers and the young campers — a “pro-social” activity to occupy their summer days.

That’s when the Annie E. Casey Foundation stepped in with a $10,000 check to fund the second week

The Baltimore, Md.-based nonprofit, which focuses its efforts on at-risk and low-income young people throughout the U.S., has been a long-term partner with Santa Cruz County Probation Department’s juvenile justice division, said Nate Balis, the foundation’s director of Juvenile Justice Strategy Group.

What caught the eyes of organization officials, Balis said, is that Aztecas focuses on young people once thought to be at risk of being caught up in the legal system, many of whom may have once been deemed “dangerous or irredeemable.”

“What is so impressive is that it incorporates opportunities for leadership for young people in the program,” Balis said. “Not only is Santa Cruz County investing in them with the opportunity, but they are giving them the opportunity to lead. Instead of separating them from the community, they are connecting them to their community.”

Castaneda said the unexpected donation brought tears to her eyes.

“What a gift to be able to provide this program to the community,” she said.

The camp is run by Aztecas Soccer Club, which was created 11 years ago with a similar idea: keeping young people engaged in activities such as sports and offering academic support keeps them out of trouble and in school.

That program provides youth trainers, who help coach their younger peers for the summer camp.

Before they start, the Aztecas players go through a weeklong training session.

Some get paid for their efforts, while others receive community service hours required for graduation.

The roughly 75 participants get a daily breakfast, lunch and a snack.

Noah Gomes, 9, was on a water break as he gushed about his second year participating in the program.

“You have a lot of fun, and you keep practicing and getting better,” he said.

Anika Radich, 11, a sixth-grader from Valencia Elementary School, said she has been playing soccer since she was 5. This summer marked her first time taking part in the camp.

“I love it here because the coaches are so helpful,” she said. “They really care. And I’m getting in shape. It’s way better than I thought it would be. I’ve always loved soccer.”

For information, or to make a donation to Aztecas Soccer Club, email [email protected]