WATSONVILLE — A Santa Cruz County Superior Court Judge ruled Monday that there is enough evidence for the man suspected in a 2004 murder to head to trial.

Mario Albert Lozano will return to court on Sept. 4 for arraignment.

Judge Steven Siegel made the ruling after a one-day preliminary examination.

Lozano, 32, was arrested in Mexicali, Mexico in February, 14 years after he allegedly stabbed 17-year-old Isaac Guzman more than 30 times. His mother was later convicted for helping him flee to Mexico to avoid the charges.

Lozano will now head to trial on the murder charge. He also faces charges that he tried to dissuade a witness, as well as several gang enhancements. He faces life in prison if convicted.

Lozano could also face federal charges for fleeing the country to avoid prosecution.

Investigators say that Lozano stabbed Guzman more than 30 times on Dec. 3, 2004 on the 300 block of Airport Boulevard in Watsonville.

Family members said Lozano was dating Guzman’s cousin, and that the attack may have been sparked when Guzman confronted Lozano for abusing her.

TODD GUILD - January 11, 2022
APTOS—Last fall, Cabrillo Gallery opened its doors to the public for the first time in 17 months. The annual “12x12: An Open Invitational” exhibit... 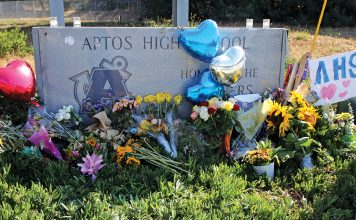 EcoFarm rescheduled as a virtual conference in March