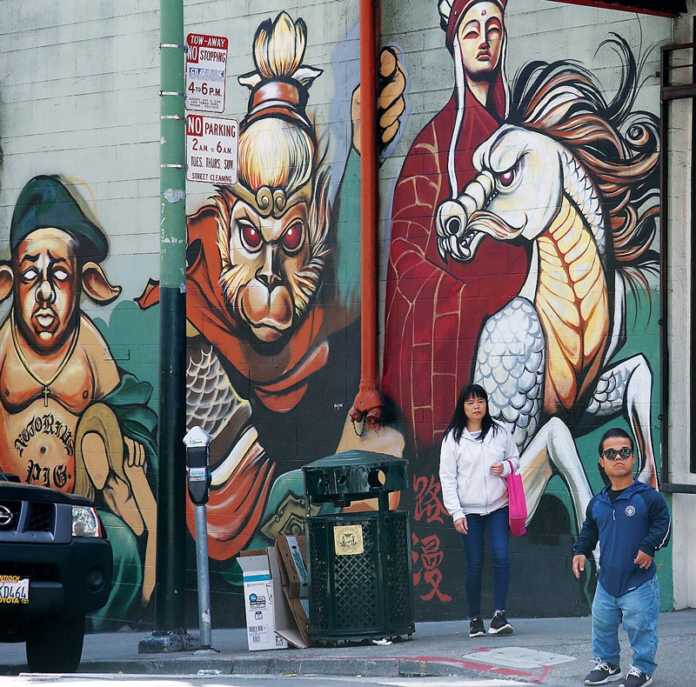 SAN FRANCISCO, CA — In the first part of this story my wife Sarah and I had just wrapped up our Szechuan dinner in Chinatown during her birthday celebration weekend in the city. Afterwards, we walked to the edge of the Financial District to one of our favorite comedy clubs, Punch Line San Francisco, where we had tickets to see the famed San Francisco comedian Will Durst.

He was actually born in Wisconsin, but has earned a huge reputation in San Francisco where, for a while, he had a radio show, and then went on to gain a big name in stand up comedy. We’ve seen him several times and he’s never let us down. The two female warm up acts were tremendous and definitely warmed the crowd up. Durst was on fire and in top form at 67 years old.

The Dewey Monument sits in the center of Union Square. It was erected in 1901-03 to honor Admiral George Dewey, a hero of the Spanish American War. Alma de Bretteville Spreckels modeled for the figure. (Tarmo Hannula/Pajaronian)

After the show we wandered down to the Ferry Building and took in the great sights of the bay and the glowing Bay Bridge. It was calm and quiet and a welcome way to soak in a feel of the city. My great aunt Emily told me she and her friends used to take the ferry from Sacramento to the Ferry Building in the heart of the Embarcadero. They would wander around the city and then ferry home at night. Opened in 1898, the building features a 245-foot clock tower.

I’ve learned that there are scores of sunken ships all around the waterfront in the city. At one point there were so many ships sailing into the region for the Gold Rush that there were widespread docking issues. Caught up in gold fever, it’s said that people would simply abandon their ships—captains, crews, and passengers— to head to the hills in search of fortune. Thus, a huge number of the ships, left to crumble and fall apart, ended up on the sea floor.

After the Embarcadero visit we turned back toward our hotel and caught the trolley car up the very steep California Street toward the Mark Hopkins. For some reason, the driver let us travel for free, which added a nice twist the end of a great evening.

Chinatown is a bustling marketplace on a Sunday morning. (Tarmo Hannula/Pajaronian)

On Sarah’s birthday we walked into Chinatown to New Asia (772 Pacific Ave.) for a dim sum breakfast. The place is always packed and offers a great taste of China and San Francisco. Scores of women push their stainless steel carts to-and-fro, barking out the names of freshly prepared Chinese rolls, buns, noodles, meats, soups and various rice dishes. Our tab was around $26. The whole experience was rewarding.

By plan, we walked several blocks through the Financial District to Market Street to watch the San Francisco Pride parade unfold. Organizers said more than 150,000 people typically attend the event, which is said to be one of the world’s largest celebrations of the LGBT+ community. Thousands line the streets to cheer. About 100 floats drifted along Market Street toward the Civic Center. Music, colorful flags, fancy costumes, dancing, posters, banners, streamers, crazy hats, Kamala Harris, Gavin Newsom, city leaders, firefighters, cops — the whole mixed salad got into the act.

By then we were running out of steam and I was stuck with the task of trying to usher Sarah over to Fisherman’s Wharf where a surprise guest was going to meet us.

I flagged a cab and instantly settled into a fascinating conversation with the driver who said he was from Washington D.C., my hometown. We ran down a checklist of spots we knew from our youths: Georgia Avenue, Rock Creek Park, Alaska Avenue, the Smithsonian, Walter Reed Army Medical Center, and on and on.

People tell me all the time that they’re from D.C., and when I ask them about what part, they say commonly say Arlington (which is Virginia), or Bethesda (which is Maryland). Few people are from D.C.; it’s only 69 square miles. When he left us off we were chiming away about our youths, families and everything D.C. we could squeeze into a 20-minute ride.

A panel on the front doors of Grace Cathedral in San Francisco. The “Doors of Paradise” are replicas of the famous doors in the Baptistry of Florence Cathedral, Italy, by artist Lorenzo Ghiberti (1425-1452). They are considered the high point of technical and artistic bronze work in the early Italian Renaissance. (Tarmo Hannula/Pajaronian)

We walked into Scoma’s, an Italian seafood restaurant that’s been around since 1965. Every seat looks out onto the busy waters of the wharf district in a relaxed and quiet atmosphere. We were led to a table and I charged off to the restroom. That’s when I spotted Sarah’s son, Stuart pulling up to the valet with his wife, Lori. The timing was perfect and I had managed, somewhat, to maintain the surprise element.

“Look who I found wandering around the wharf,” I told Sarah, as the three of us came up to the table. It worked; Sarah had no idea what the build-up was about. After we enjoyed a great lunch together, Stuart and Lori drove us to the nearest BART station and we bid farewell. Though we crammed a lot into our overnighter in the city, it proved to be a fulfilling and exciting way to celebrate a birthday.

Tarmo Hannula - January 11, 2022
APTOS—Last fall, Cabrillo Gallery opened its doors to the public for the first time in 17 months. The annual “12x12: An Open Invitational” exhibit...