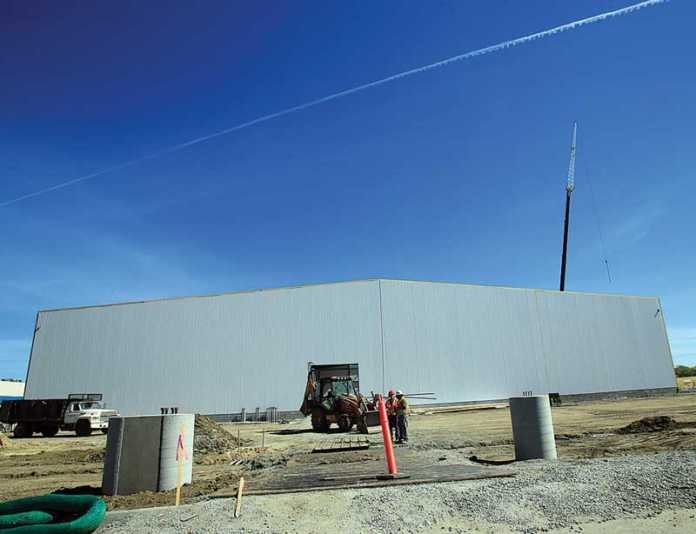 The 50,000-square-foot building will serve as the company’s cooler facility, from where as many as 60 vegetables grown by the company will be received, cooled, stored and shipped.

Owner Dick Peixoto said he expects the building to be completed in May.

Construction will then begin on another 50,0000-square-foot building, will include administrative and sales offices.

The expanded cooler space more than doubles the company’s capacity, and will allow it to increase production, Peixoto said.

Peixoto said that the current facility on 220 Holohan Road is 25 percent undersized, and is so limited that Lakeside employees cannot load pallets of produce until the trucks arrive, thus lengthening the amount of time they must wait. In addition, the truckers can watch their trucks being loaded via video monitors in a truckers’ lounge.

With eight bays at the new facility that will allow several trucks at once to pick up their orders, however, the company can have orders waiting for them.

That will increase loading time for both the drivers and Lakeside, and dramatically boost productivity, Peixoto said.

On the roof, 70,000 square feet of solar panels will almost entirely power the facility, and a PG&E substation next door virtually guarantees year-round power.

The new space brings together Pajaro Valley Laser Leveling and Pajaro Valley Irrigation, both part of the Dick Peixoto Family of Companies.

Peixoto also said the company could soon be looking for new employees, thanks to the projected increased production and an additional 250 acres recently purchased.

The Peixoto family has been farming in the Pajaro Valley since the late 1800s. Peixoto started Lakeside Organic Gardens as a 55-acre green bean farm in 1996, and has since expanded to nearly 2,000 acres and converted to 100 percent organic operations.

Lakeside is the largest family-owned and operated organic vegetable grower/shipper in the U.S.