The County of Santa Cruz held a soft opening for a new Covid-19 testing site at Ramsay Park Thursday. The site will initially focus on frontline health care workers, first responders and employees working in essential services and roles, said county spokesman Jason Hoppin. A partnership between the State, the Covid-19 Testing Task Force and OptumServe, the site will have an eventual capacity of 132 specimens per day that will be sent to commercial labs for processing. Testing will eventually welcome all community members, although symptomatic individuals are encouraged to call their health care provider and arrange testing to facilitate quicker diagnosis.

Starting Friday bookstores, florists and sporting goods stores, medical offices and other businesses can begin to open in various stages around California, including Santa Cruz County. The move, as approved by Gov. Gavin Newsom and local health officials, is only gradual easing into fewer restrictions in a worldwide effort to quell the virus. There are currently 3.78 million world cases and 265,000 deaths. Around 1.26 million people have recovered. There are 60,616 cases in California with 2,464 deaths.

A bench was dedicated in Watsonville Plaza Wednesday in honor of the late owner of Jack’s Cigar Store, Jack Novcich. Zarko Radich, who now owns Jack’s Cigar Store & Lunchroom, 464 Main St., was joined by his wife, Nevenka, his son, Mish, and others for the brief dedication. Novcich arrived to the U.S. through Ellis Island in 1906 and worked his way across America via railroad and eventually opened Jack’s Cigars in Watsonville in 1914. The Pajaronian will run a story next week on this event and history. 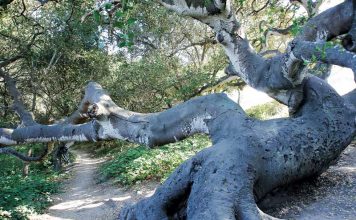