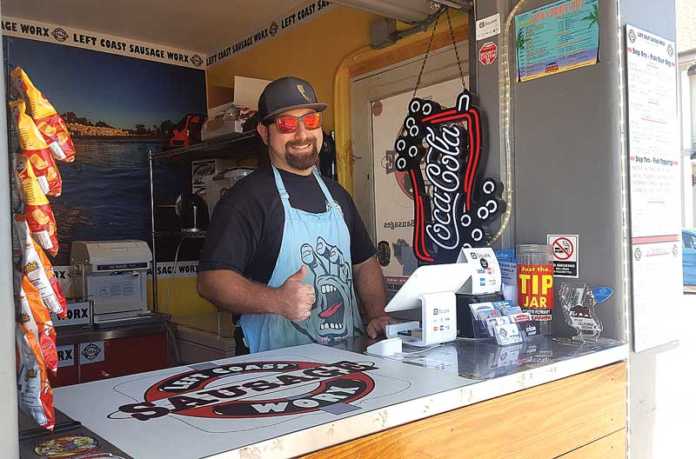 The business of beautification

A beautification effort of the Village four years ago resulted in permitting processes and fees being put in place before shops could legally place signs or display wares outside their shop. The administrative policy for enforcing these regulations was, at first, by complaint only; something that changed during April’s city council meeting when they enacted a more rigorous approach.

July was the first month of implementation and the more aggressive strategy quickly brought results and cleaner streets.

“We recently did a sweep to see who has a legal conditional use permit or sign display permit,” Senior Planner Katie Herlihy said. “Code enforcement is not new — it passed more than four years ago when the city council noticed people putting things out on sidewalks.”

But for some newer shop owners, it came as a surprise.

Josh Fisher, who owns Left Coast Sausage Worx, did not receive the warning letter sent out by the city regarding his hanging plush hot dog and outdoor cooler containing water bottles. When a city employee came out 30 days later and began writing him a ticket, he was caught off guard.

“It affected a lot of people, mainly businesses,” he said. “If the public can see it, it can be a permit issue.”

Fisher quickly brought his business into compliance — his ticket redacted after the misunderstanding was brought to light — and he said he has no hard feelings for the process.

“Businesses had 30 days to rectify any problems, which is generally fair,” Fisher said. “I understand their objective; I don’t necessarily like it, I am just happy it is fair.”

He will soon be getting a pre-approved design and sidewalk sign and agrees with the idea that a universal theme looks good in a place like the Village.

“There was a big effort by businesses to create a specific design,” Herlihy said. “As long is it follows regulations, it is approved over the counter.”

But while the idea of clean streets and universal marketing is appealing, some business owners said that more should be taken into account.

“If someone is putting stuff out that is trashy, will be in the way of ADA compliance or people can’t walk by — I think that should be addressed,” Fisher said. “But if it’s not hurting anyone and helping business, what’s the harm? I think there is a better way to go about it.”

And for other businesses, cost is a big concern. Holly Smart, the owner of Kickback who rents shop space and has been a fixture in the Village for more than 20 years, says she can’t afford the $3,000 deposit required to apply for a conditional use permit.

“There is less traffic and fewer sales now at a time my rent went up more than 50 percent,” she said. “I am not sure we are even gonna make it to next month.”

Her shop sits on a corner lot, and before she would frequently hang a few articles of clothing for sale out on hooks to draw in customers. Now she said the attention is on bare stairs, and even processes such as ordering her merchandise have changed because she would use customer interest to determine which items to order more of. Her confusion is compounded by the fact that her displays were hung, and not impacting the flow of traffic in any way.

“I can understand them wanting sidewalks clear, but not intervening on private property,” she said. “It is unfair, hurting business and overall, I don’t think it’s good for the community.”

According to Herlihy, the $3,000 deposit is used to pay the planning commission, who take their hourly cut before refunding the rest back to the business owner. The catch: approval is not guaranteed, and they do not get back any of the money spent if denied.

Still, some merchants say that they have been cautioned by others that any attempts will be met with rejection.

“If I knew that it would work, I would absolutely try,” Smart said. “We really need our outdoor displays, but merchants have been told not to apply because they will not be approved.”

But Herlihy points to Capitola’s Rainbow City Limit as a store that has successfully maneuvered the system.

“The end goal is to be maintaining a great place,” Herlihy said. “We really have to treat everyone consistently. The majority of shop owners have come into compliance and it’s noticeable; a great clean-up effort by all and it is appreciated.”

Instead of fighting, the merchants are instead hoping for more meetings and future discussions that would result in a more accommodating attitude.

“I want the city to take a step back,” Fisher said. “It is really hard to make a living because of the seasonal nature of the business, so anything like signs, flags, helps.”

As for Smart, she hopes that store owners would be brought into the discussions themselves. Having spent a lot of time looking up information on the ordinance, talking to officials and trying to get more information, she said what they were initially given did not explain everything.

“I would like the city to hold another meeting, invite all the businesses and look for real solutions that won’t negatively impact business,” she said.