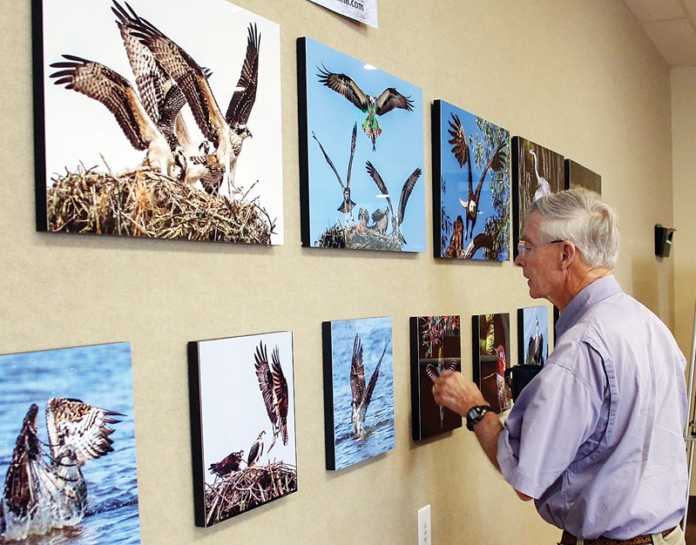 “We had a big crowd in here before 6 this morning,” said volunteer Sonia Deetz. “It was exciting to see so many people up early and ready to go.”

Deetz said some of the birders were heading south on a field trip to Big Sur to catch a glimpse of the California condors and other birds.

Based in Watsonville, the family-oriented festival has become a hotspot for birders around the globe, with Watsonville sloughs such as Elkhorn Slough being a huge draw. Being on the migratory flyway, the Central Coast has proven to be a magnet for migratory and local birds.

Kat Crichton and Steven Fanucchi of Mountain View said it was their first visit to the festival. Crichton said that living near the San Francisco Bay has helped ramp up her interest in birding and that she was hoping to catch a new glimpse of some birds outside her region.

“We signed up for the owling field trip, so I’m excited about that,” Crichton said. “We heard about this in Paso Robles when a teenager mentioned the festival to us.”

Fanucchi said he and Crichton would be staying in an area hotel and were looking forward to trying out some local restaurants.

“I’ve heard about the slough trails here so we’re anxious to get out there and have a look,” he said.

Tom Deetz said he has been volunteering at the event on the programming committee for a few years.

“This area is just so rich, with the sloughs and coastal waters,” he said. “The birds coming through with the start of the fall migration are incredible.”

Nicolette Dodgson said she chose to volunteer with the event to help bolster her grasp of area sloughs and local birdlife. She said the volunteering will help embellish her studies at UC Santa Cruz in ecology and evolutionary biology.

“I’m so energized to be up here this morning,” she said. “I’m glad to be a part of this exciting festival and I’m sure I’ll get a better picture of the birding world out here. Supporting this event is important. There’s so much to learn right here on the Monterey Bay.”

Benny Isaac Jacobs-Schwartz, owner of the tour group, Birds by BIJS, said he would lead a few field trips during the event, including Beginning Birding and tours of Watsonville sloughs.

“My approach for beginners is a little different,” he said. “I want people to slow down and settle into their environment and learn to listen and get a grasp of their surroundings. This isn’t just about crashing into the woods and running up a list of birds you see. It’s about gaining a mindfulness of your natural surroundings.”

Jacobs-Schwartz said one key aspect he teaches is to look for a bird’s beak shape, which can give an idea of the bird type, like a bird of prey, a shorebird, ones that eat seeds or pull nectar from a flower.

Since graduating from UC Santa Cruz in 2013, he has worked as an avian field biologist, international bird guide, land steward and wildlife photographer in places like Central America, Yosemite, Trinidad and Tobago, Ecuador, and most recently to coastal Alaska. He is also the author of “A Field Guide to Birds of UC Santa Cruz.” For information about his work, visit birdsbybijs.com.

“I have come to learn that Watsonville is the spot for birds in Monterey and Santa Cruz counties,” he said.

The Monterey Bay Birding Festival is headquartered in the Community Room on the top floor of Watsonville Civic Plaza, 275 Main Street.

TARMO HANNULA - June 29, 2022
WATSONVILLE—The Watsonville City Council at its Tuesday meeting signed off on an agreement with Pajaro Valley Arts for the sale of the historic Porter...