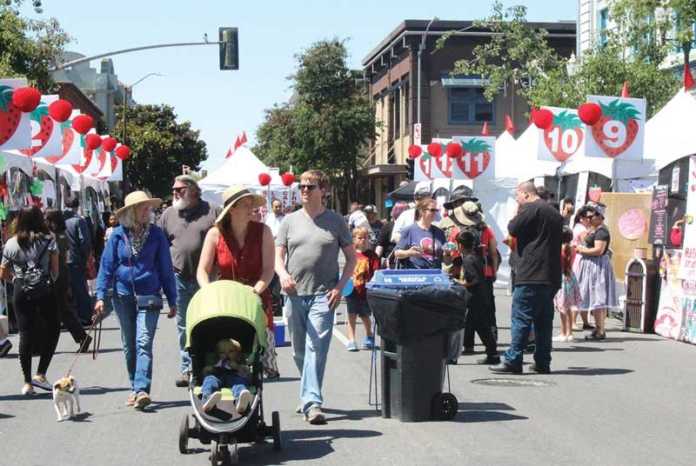 WATSONVILLE — Thousands of visitors poured into the 25th annual Watsonville Strawberry Festival over the weekend to relish the cash crop of the Pajaro Valley. However, numbers were slightly down as an air of caution permeated the event from a mass shooting just a week before at the Gilroy Garlic Festival, where three people were killed and many others injured.

“There just weren’t that many people here yesterday,” Zarko Radich, owner of Jack’s Cigars said on Sunday. “But it’s better today. I think people are a bit cautious from the Gilroy shooting. But we’re out here. Yesterday we walked right up Main Street, no problem, there were that few people here. But right now I’m going where the smoke is because where there’s smoke, there’s meat, and that’s what I’m getting.”

Mila, 8, shows off some delicacies in front of the Rockabilly Mafia Dolls’ booth Sunday at the Watsonville Strawberry Festival. (Johanna Miller/The Pajaronian)

Watsonville artists decorated the end of Strawberry Lane in colorful chalk art, including this message to the community of Gilroy following last week’s mass shooting at the Gilroy Garlic Festival. (Johanna Miller/The Pajaronian)

Watsonville Police Sgt. Mish Radich, who was patrolling the event Saturday, estimated WPD had about 20 officers working the event with the aid of several Santa Cruz County Sheriff’s deputies and a helicopter crew from the California Highway Patrol.

“So far, everyone has been friendly and helpful,” Radich said. “People are out here today to have a good time — that’s what this is about.”

The crowd revved up a notch where one of several pie-eating contests took over the main stage Sunday afternoon. With contestants young and old wolfing down their pies, the crowd cheered them on coaxed by a boisterous emcee with a microphone and a mountain of speaker boxes. With her pie tin polished clean and a strawberry mess plastered over her face, Desiree Jimenez of Santa Cruz emerged the winner, fetching a $50 gift coupon from Fatima’s Fine Jewelry of Watsonville.

Desiree Jimenez gobbles her way through a strawberry pie during a pie-eating contest to claim a $50 gift coupon from Fatima’s Fine Jewelry. (Tarmo Hannula/The Pajaronian)

Marty Strickland, owner of Fruit Friz, had a crew whipping up his original and popular icy drinks Sunday. He said he was seeing a slightly dimmed down version of the festival from years past. Several of his drinks included locally grown strawberries blended with ice.

Reports are that the event wrapped up smoothly Sunday evening, with carnival rides twirling under the late afternoon sun and people dancing to the final strains of the final musical act, Banda Tierra de Jalisco.