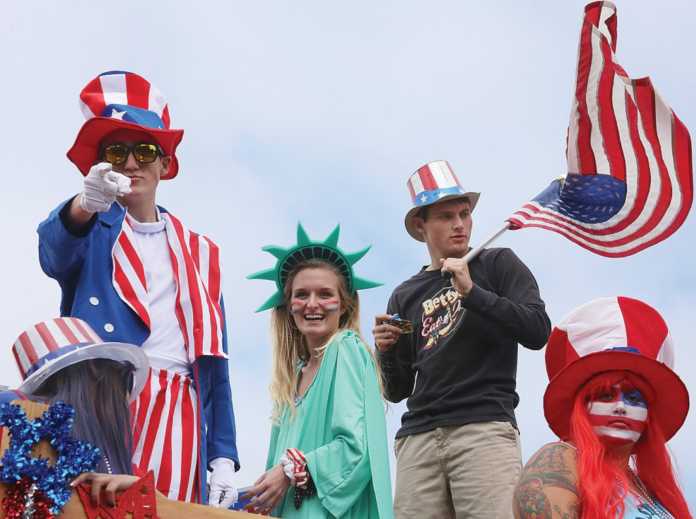 APTOS — The Fourth of July parade unfolded along a section of Soquel Drive Thursday, with 103 entries in what has been branded as the World’s Shortest Parade.

Formed in 1961, the parade used to last 10 minutes as it threaded along a short business district of Aptos Village.

This year edged past last year’s parade by 14 entries. Co-CEO of the Aptos Chamber of Commerce, Karen Hibble, said she felt that people were yearning for some form of positive community engagement and that the parade this year was a good fit.

“It’s just so positive,” she said. “And people need that. You see kids and grandparents — families gathering on the street to have a fun and safe time with the community. It’s perfect weather for ponies and dogs and everyone out today. In our 58th year, our parade is diverse and inclusive and it just keeps getting better every year. We’re just so thankful for all the folks that make this happen, and for the wonderful CHP for all they do.”

California Highway Patrol officer Julieta Trenado said the Santa Cruz office had about 10 officers assisting with traffic control at the closed off section of Soquel Drive.

“We’re also getting help from senior volunteers and our cadets,” Trenado said. “So far everyone is being very helpful.”

Dr. Chris DiMaio of Aptos said he has attended the parade for years.

“I live close by so I can just walk down here with my dog, Giselle,” he said. “They do a good job and put a smile on everyone’s face. I was hoping the veterans would be out here in the parade like they usually are.”

DiMaio said he was a battalion surgeon in the Marine Corps and served in Vietnam in 1968-69.

“I’ve been in the parade many times before,” he said. “It’s wonderful. It’s low key and it’s just great to see these happy Americans all together having a good time.”

Members of the Watsonville Community Band, who were at the front of the parade, said they’d quickly pack up afterwards and head to Watsonville to march in the city’s Spirit of Watsonville parade at noon.

Players from the Aptos 12 All Stars hand out candy to the crowd. — Tarmo Hannula/Register-Pajaronian