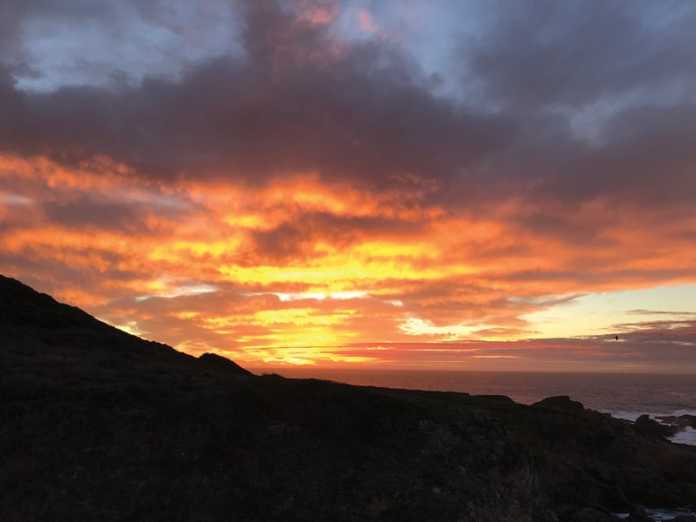 Food: Ella’s at the Airport

Ella’s Grass-fed Burger has to be in the running for the best burger in Watsonville. It’s juicy — I order mine medium — and the applewood smoked bacon, seared sweet onion, oven-fried tomato, organic greed and house-made spread complete the package. The bun, which is freshly baked, never comes soggy, and hardly ever falls apart during the feast. Make sure to order the sweet potato fries, too — mmmmmmm.

I’m always up to try a new brewery, and I’m happy to say that Dust Bowl’s new taproom in Monterey is a treat. Along with their dozens of drinking options, the taproom at 290 Figueroa St. also has a giant outdoor patio, setting a laidback tone that lends itself to a cool beer on a sunny day. The Therapist, an imperial IPA, and Lateral 6, their Juicy IPA, are on my rotation. Mouthful of Miracles, a double brut IPA, is also growing on me.

Nestled between Carmel and Big Sur, Garrapata State Park is an impressive ensemble of trials, beaches and beautiful views where one can enjoy minutes, hours or a whole day in Mother Nature. Garrapata’s State Beach, always teaming with life but never overwhelmed with people, is one of my favorite beaches on the Central Coast. And the view from Soberanes Point at the top of Whale Peak Trail features some of the best views of the fiery sunsets of the summer. There’s also a semi-challenging trailhead, Rocky Ridge Trail, that will lead you up and about the vast string of canyons.

Though Woodstock Pizza, 710 Front St., Santa Cruz, has been open for several years, I only made my first visit a week ago. The business got started in Oregon in 1977 and is widely known for freshly made pizzas. I tried their Cowell’s Club sandwich. It’s made on freshly baked bread with melted mozzarella and a hint of pesto, with chicken, Canadian-style bacon, fresh Roma tomatoes, red onions and spring lettuce. It’s served with a side of ranch dressing. I thought it was delicious. On the downside was the blaring music which made conversation impossible. My wife Sarah and I escaped outdoors and found a quiet table in front of an open fire pit that saved our evening from being trashed by canned music that sounded like a quartet for chainsaw, Harley-Davidson, leaf blower and jack-hammer.

Verve Coffee has made a splashy and trendy name for itself around Santa Cruz County, but also have locations in LA, San Francisco, Palo Alto and Japan. With modern lighting and furniture, their cafes have become poplar spots with their menu of coffee beverages, cold drinks, pastries and light snacks. I ordered a latte at the Capitola location, 816 41st Ave. There were two setbacks: Loud overhead music, and no one called out our order when it was done so our drinks got cold as we sat and waited. I finally wandered over and fetched them. But we enjoyed our drinks anyway, and we were entertained by the hustle-bustle of foot traffic on that busy end of 41st. I enjoy supporting local businesses like Verve.

Over the past several months I’ve happened upon live music at Abbott Square on Cooper Street in downtown Santa Cruz. The popular spot, which abuts the Santa Cruz Museum of Art and History, has swelled in attendance, especially on the weekend and during First Friday Art Tours, which run the first Friday of every month. I’ve enjoys a rich blend of music here, from Cuban and Brazilian to Mexican, rock and pop. There’s plenty of outdoor seating, dance space and no shortage of colorful folks strolling about.