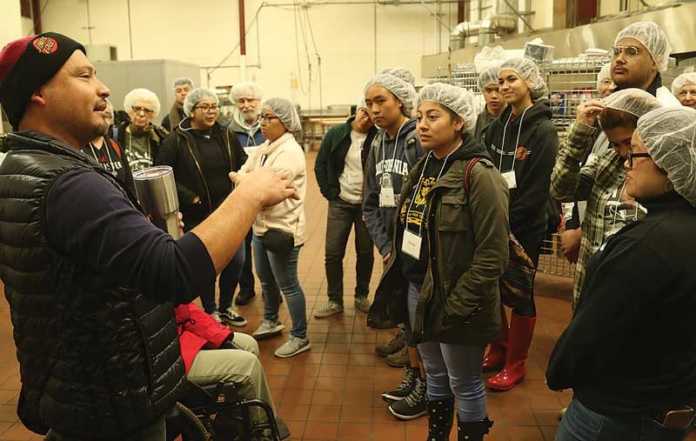 The space was even more packed Monday when 25 UC Santa Cruz students spent part of their spring break there.

Run by El Pájaro Community Development Corporation, the kitchen incubator is a place for self-made cooks to make and package their food for commercial sale. Products made there include My Mom’s Mole and the Green Waffle.

The 8,000-square-foot kitchen offers several fully stocked workstations for entrepreneurs who would not otherwise be able to afford to rent or purchase their own space.

That is one of the reasons the trip meshed with the university’s Alternative Spring Break, and this year’s theme of food justice and sustainability.

But the lion’s share of the week involves hands-on activities and “experiential learning,” Asher said.

“They are learning about the community in a very different way than you can in the classroom,” she said.

The students started their week helping paint a mural, and will also visit a social justice class at Watsonville High School and volunteer for a day at Second Harvest Food Bank.

Roman Ayala, 21, was in his third year of participating in Alternative Spring Break.

“I keep coming back because I love exploring the city of Watsonville, and all that it offers,” he said.

But Ayala, who comes from Napa, said the most important part of his participation — and why he was working instead of heading to Mexico with his friends from UCSC — is his interest in social justice.

He recently learned, for example, that low-income farmworkers often cannot afford nutritious food, and instead resort to junk food.

“I put myself in a program where I can learn about the communities around me,” he said.

Estela Carreon, who comes from a small town in the Central Valley, said she was back for her second Alternative Spring Break.

She said both her parents are farmworkers, which gives her an understanding of the struggles faced by the workers here.

“I love service learning,” she said. “I’m interested in how we can create an impact and make a difference.”