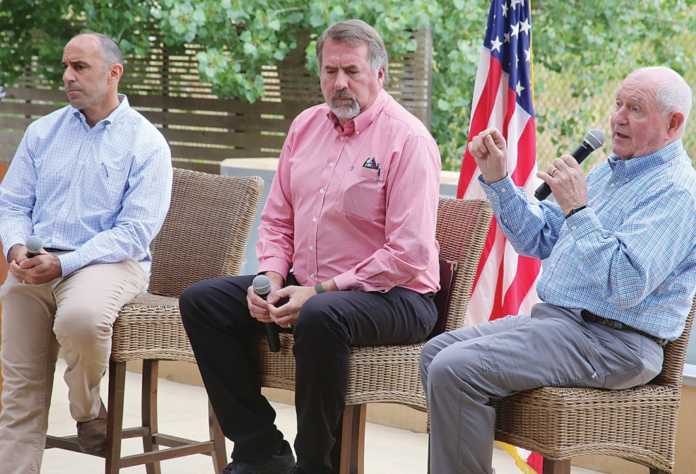 Topics included farm technology, immigration, food stamps infrastructure money and the United States–Mexico–Canada Agreement, or USMCA, which is sometimes referred to as the New NAFTA, or the North American Free Trade Agreement, the previous trilateral agreement it is meant to supersede. Climate change was also tossed about in the meeting

“We are really researching on how agriculture, both organic and conventional, can be part of the carbon sequestration rather than carbon emission,” Perdue said. “Agriculture is getting a lot of allegations regarding its contributions to CO2 emissions; we think it can be a carbon Saint … if we are smart about some of the techniques we use.”

Held at the Water Resources Center on Clearwater Lane, about 150 people attended the informal, outdoor Q&A, surrounded by lettuce and strawberry farms alongside the Pajaro River.

“I think by and large if you look chapter-by-chapter and verse-by-verse, whether it is labor, agriculture, environment, safety, or health, this (USMCA) is a better agreement,” Perdue said. “Mexico ratified it overwhelming; Canada, we believe, will as well. There are a few little things that can be tweaked. Like any trade negotiations, it’s not perfect and you’re not going to get everyone happy about that.”

Regarding the Guest Worker Program, Perdue said, “We have dispatched our lead USDA person to the White House to help them on the ag portion of the immigration proposal that is coming out of the White House … We need to make sure ag is represented. Agriculture needs access to a legal reliable work force. We know we are not getting it from domestic workers; we need a guest worker program.”

Following the meeting, Panetta addressed the Guest Worker Program: “In Congress we are dealing with that issue right now. We’re actually making sure that those who have worked here in agriculture get to stay here in agriculture with an opportunity to earn citizenship — but to also to streamline the guest worker program. There are certainly issues that you have to deal with: housing, transportation, get it under one agency, sitting down at the table and grinding this out.”

“I think he (Perdue) is a very good listener; he was up to speed,” said Peixoto, owner of Lakeside Organic Gardens. “I was amazed with the questions that they asked and he had the answer for them so I was very impressed with that. He’s been learning about the technology here in the area and this definitely the way agriculture is headed.”