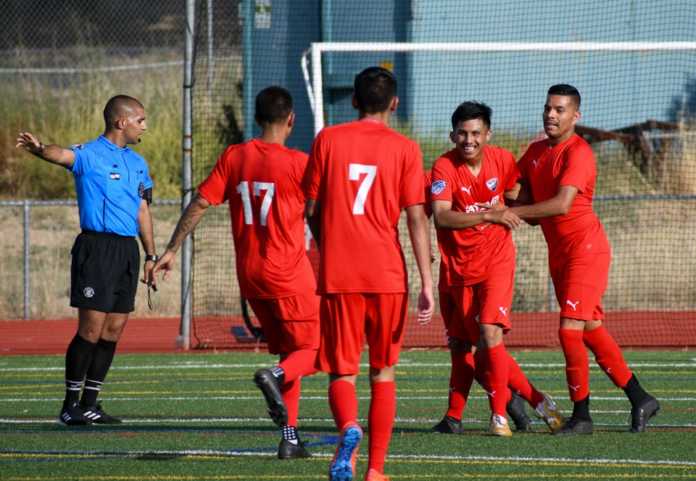 It took some extra time and beyond that for Pajaro Valley United FC to get past division rival Contra Costa FC in the United Premier Soccer League Wild West Division championship on Saturday.

PV United defeated Contra Costa in a shootout, 5-3, and will move on to this weekend’s Western Conference championship.

PV United will travel to Southern California to take on Cuervos FC — the SoCal Division champs — on Saturday at The Master’s University in Santa Clarita. Kickoff is slated for 5 p.m.

Cuervos FC is ranked No. 7 in the UPSL Hub Top-10 rankings, while PV United was left off despite defeating Contra Costa FC and Nevada Coyotes in the playoffs.

PV United and Contra Costa went into overtime tied at 3-all but neither team was able to close it out in the two extra 15-minute periods.

PV United had already made its longest road trip of the season to Reno two weeks ago for the division semifinals.

PV United notched a 3-2 win in extra time against the Coyotes FC to earn a spot in Saturday’s championship game.

With the win, Capitola-Soquel advanced to the Section 5 tournament but came up short in Thursday’s opener against District 44 champion Santa Clara Westside, 6-3, at Pajaro Valley Little League.

Capitola-Soquel is still alive and play against Hollister in a do-or-die elimination game today at 5 p.m.

Coaches are encouraged to report scores, stats and highlights to [email protected] following games or call 831-761-7335. Please include your name and contact number in the email.

Also, don’t forget to check out our RP Sports Podcast Facebook page, where you can find links to previous and new episodes along with a photo gallery with updated images. Click on the button below to join.