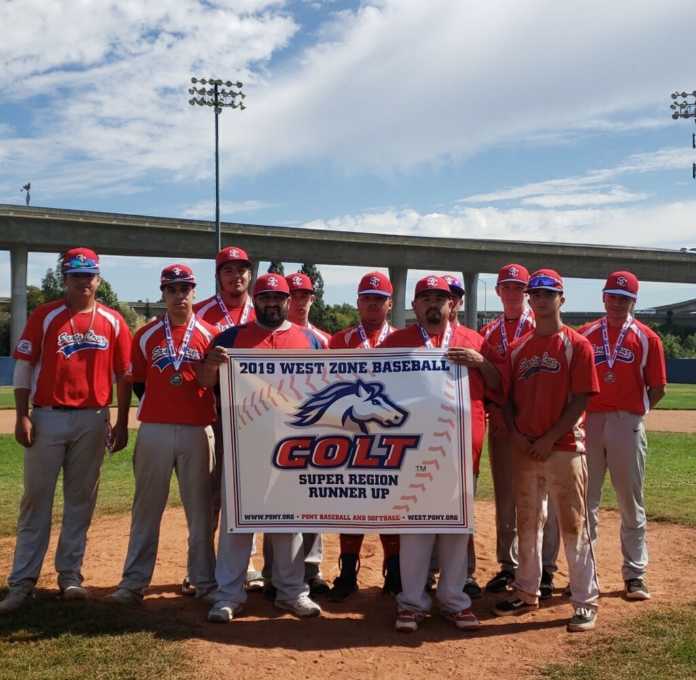 The Santa Cruz Red Colt team was scheduled to play on Sunday against Ceres Blaze in the Super Region Tournament championship at P.A.L. Stadium in San Jose, but it had to forfeit the game because it did not have enough players.

As the runner up, Santa Cruz Red still advances to the West Zone Tournament, which begins Thursday at P.A.L. Stadium.

Santa Cruz Red faces Covina in the opening round. The winner plays against Arizona or Ceres Blaze, while the loser falls into the losers’ bracket.

Santa Cruz defeated Penn Cities in the opening round of the Super Region, followed by three straight games against South San Francisco to advance to the championship game.

Santa Cruz Red, which is made up of kids from Watsonville, Santa cruz and Salinas high schools, also won the NorCal Coast Region tournament at Harvey West Park in Santa Cruz. They cruised through the tourney with an unblemished 4-0 record to defeat Monterey and Santa Cruz Blue.

Next up, Santa Cruz Red is back at P.A.L. Stadium to play a West Zone first-round matchup against Covina on Thursday at 4 p.m.

Utah 5, PV United 0 >> Pajaro Valley United FC was driving full speed on the road to Texas for a shot at playing in the United Premier Soccer League national semifinals.

But that road trip took a U-turn after PV United came up short against the Murcielagos in Saturday’s national quarterfinals.

PV United finished the season 11-1-2 and placed third in the Wild West Division with 22 points.

PV United went into the UPSL Wild West Division playoffs as the No. 3 seed. It notched wins against San Leandro, Nevada Coyotes FC and Contra Costa FC, which ended in a shootout.

PV United went to Southern California and won another shootout in a battle against Cuervos FC to capture the Western Conference Championship.

Coaches are encouraged to report scores, stats and highlights to [email protected] following games or call 831-761-7335. Please include your name and a contact number in the email.