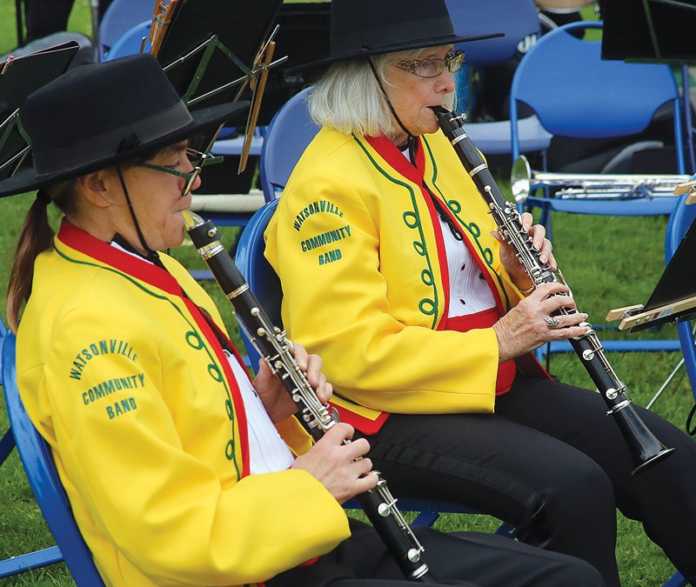 About Town, Week of July 22

I ran into a group of visitors from Pennsylvania Thursday on the bluffs overlooking the Santa Cruz Beach Boardwalk. They were watching the fog bank come in at the San Lorenzo River mouth. While much of the country is enduring intense summer heat, all of us were out there basking in the marine cool temp’s. They told me they were planning on heading up the redwoods Friday to soak in the peacefulness of the woods. So far, they said, their two-week journey to the west coast had been rewarding.

Meteorologists say temperatures will soar to about 104 degrees Saturday in Sacramento and in Bakersfield. There is now an excessive heat advisory in the Central Valley from Sacramento south through Bakersfield, and from the Carmel Valley south to around San Luis Obispo. Meanwhile, Paris topped out at 109 Thursday with more hot days on tap. Several countries, from Belgium, Germany and Spain, are smashing heat records. Ironically, the 19th stage of the famed Tour de France bicycle race had to be halted Friday because of snow, hail and mudslides. It sounds crazy.

Organizers flipped the on switch at the annual Gilroy Garlic Festival today to begin three days of food, music and fun wrapped around the area’s abundant crop, garlic. Founded in 1979, the event is hosted by thousands of community volunteers who have raised millions of dollars for local schools, charities, and non-profit organizations.

The FBI is warning the public of an increase in “virtual kidnappings,” telephone calls and social media postings about your relatives that have been kidnapped followed by requests for ransom money to get them out of trouble. Callers are clever in manufacturing nutty tales of the fake stories and even fetching the names of those that answer the calls and building stories from there. The FBI said no one should respond to the hoax calls on the phone or on social media.

Capitola City Council will address the ongoing issue of traffic congestion in their tiny town. With only a handful of routes through Capitola, ideas will be bounced around with community members and city leaders on how to deal with traffic management, especially in tourist season.

Puerto Rico’s governor Ricardo Reselló stepped down Wednesday following massive noisy demonstrations in the capital, San Juan. Widespread distrust and displeasure with him came to a crest recently when more than 800 pages of leaked documents reached the public with excerps of the governor’s homophobic comments, jokes about those that died in the 2017 Hurricane Maria and more. Maria, a Category-5 storm killed 3,059 people and caused $96.61 billion in damage. Some of the demonstrators lost relatives and were without power and water for more than seven months. Huge noisy celebrations rocked the island upon his resignation at the U.S. Territory with many claiming “a victory over a long history of corruption.” Reselló’s resignation marks the first time a chief executive to step down during a term since 1947 when Puerto Ricans started electing their governors.

It appears the Fat Boy Burgers and Grill might be opening soon on Freedom Boulevard. Interior work is nearing completion and outdoor patio furniture is in place.

Johanna Miller:  Yoga studios from Santa Cruz to Watsonville are coming together Saturday for Yoga Day of Action: Santa Cruz County. For anyone attending a yoga class at participating studios, all donation proceeds will go to the National Bail Fund Network, Room for Refugees and The Refugee and Immigrant Center for Education and Legal Services (RAICES). For a list of studios and information visit the event’s Facebook Page.

On Friday, Cabrillo Stage’s “Into the Woods” theater production opens, and I for one am excited to see what the team has put together. The famous Stephen Sondheim musical is well-known and beloved by many in the theater community. It follows the story of many familiar fairy tales… and what happens after their “Happily Ever After.” Read my full article about the production here: https://register-pajaronian.com/article/fairy-tales-with-a-twist.

Cabrillo Stage’s “Into the Woods” opens Friday night at the Crocker Theater in Aptos. (Contributed)

Richmond, CA is moving towards banning electronic cigarettes, following in the footsteps of San Francisco. The ban is in response to critics who claim the devices have hampered efforts to reduce underage use of tobacco. San Francisco-based Juul, one of the most popular e-cigarette brands, is fighting back, saying that the ban will draw adult smokers back to unhealthy, combustible products.

Skateboarding and surfing have both been added to the sports roster for the 2020 Olympic Games in Tokyo, Japan. The World Surf League will assist in determining who qualifies for the games. Karate has also been added for the first time—a controversial move for some. Earlier this year I spoke with local karate instructor, Sensei Fred Castillo. He said he believed karate should be treated as more of an art form than a competition.

Quote of the Day: “Being self-critical is good; being self-hating is destructive. There’s a very fine line there somewhere, and I walk it carefully.” —Daniel Radcliffe

Tarmo Hannula: The DMV tried out a new approach to ghastly long lines and confusion over the Real ID program that got going several years ago. On Wednesday morning they closed all of their offices across the state until 1 p.m. to train their workers in “Operation Excellence.”

The move was in hopes of further training staff with Real ID transactions and overall better customer satisfaction. By 1 p.m. Wednesday a long line was in place as the doors reopened in Watsonville.

People line up outside the DMV in Watsonville Wednesday after the station closed throughout the state for a statewide “Operation Excellence.” (Tarmo Hannula/Register-Pajaronian)

We got word in the newsroom today that Roger’s Family restaurant Diner on Green Valley Road at Freedom Blvd. will have their final day of business on Sunday. The owner told us that the lease had run out and the new price was over his head. They’ve been around for seven years. They had replaced Tabacci’s restaurant.

Tarmo Hannula: Kong’s Burger & Café opened a few weeks ago in Plaza Vigil, the incubator business complex on East Beach and Union streets. The owner, Sang Soon Ahn and his wife, Soon Ja, were busy Monday serving up lunch to a number of customers — one being Jack Chacanaca, who said he was delighted with their food and friendly service. Sang Soon Ahn said he owned and ran Kong’s Market on 26th Avenue in Live Oak for 27 years before the lease ran out. The place had a reputation of being a friendly, cozy neighborhood ma & pa market that served incredible, fresh, homemade eggrolls. I enjoyed those eggrolls on several occasions over the years.

Boris Johnson has been chosen to replace Theresa May as the Prime Minister of England. He inherits a swarm of troubles, including the ongoing turbulence of the UK exiting the European Union. President Trump said he felt Johnson would make a good UK president, even though they don’t have a president, but rather a prime minister.

I saw on KTVU news yesterday that the Oakland International Airport was used to deport and transfer 43,000 detainees that fall under the illegal immigrant status over the past few years.

Two people died in a four-vehicle crash on Highway 101 near King City late Sunday night. The California Highway Patrol said that for unknown reasons a 71-year-old Salinas man, driving a 2002 Honda Odyssey southbound in the northbound lane north of Hudson Road, plowed head-on into a 2015 Nissan Rogue driven by a 38-year-old San Jose woman. That’s when an 18-year-old Folsom man, driving a 2016 Ford Fusion slammed into the Honda. Then a 24-year-old Apple Valley man, driving a 2015 Perterbilt big rig, crashed into the Nissan and the Ford. The driver of the Ford, his passenger and a passenger in the Nissan suffered injuries. Names of the fatal victims have not been released. The crash is still under investigation.

Summer heat is going to step up into the week, with inland highs reaching into the upper 80s and as high as the mid-90s. Coastal temperatures should top out in the mid-70s. Scorching heat, amped up with high humidity, is blanketing much of the U.S. from New Mexico to New England. Meteorologists say that temp’s in New York feel like 110 degrees. Michigan weighed in at 110 Saturday. Just before 11 a.m. Sunday Washington D.C. was already clocking in at 102. A score of events in numerous states have been canceled due to dangerous heat, including the annual New York Triathlon, which commonly draws thousands of runners. Three deaths related to high heat have been reported. Close to 200 million people are being affected. In Oklahoma, roads are buckling from the heat.

A man was killed in Salinas after he was struck by a train near Chinatown at Pajaro and Market streets on Saturday morning.

The California Highway Patrol is investigating two cars that were struck by gunfire around 7 a.m. Saturday in Prunedale on Highway 101 near San Miguel Canyon Road. The CHP said that a white Volvo and a silver BMW were hit by bullets. No injuries were reported. Then, on Monday night someone heaved an object at a charter bus, shattering a window on Highway 101. No arrests were made and no injuries were reported.

Heavy equipment, a work crew, road cones and traffic control continues to dominate a section of East Lake Avenue west of Holohan Road where new sidewalks, curbs and gutters are being built. Expect traffic delays in that area. (Tarmo Hannula/Register-Pajaronian)

Watsonville Community band performed in Watsonville Plaza Friday during the weekly Watsonville Certified Farmer’s Market. It was part of the ongoing Music in the Park. A new stage in currently under construction beside the bandstand for similar events.