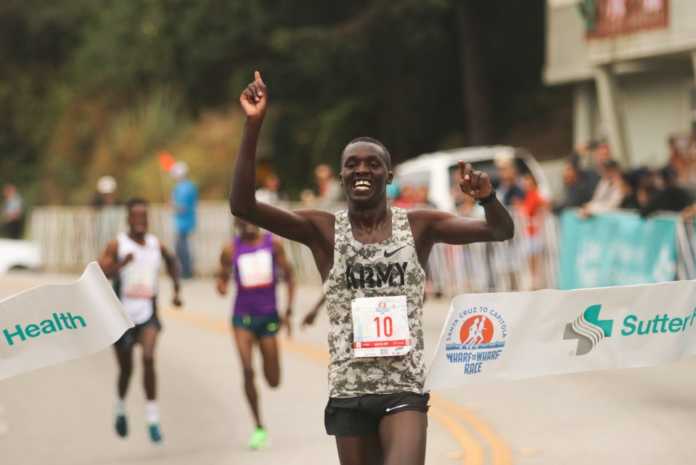 Wharf to Wharf: Anthony Rotich saves the best for last

SANTA CRUZ — The beginning of Sunday’s Wharf to Wharf Race was not unlike others in years past.

The elite runners started at the front of the pack and began to pull away from the rest of the competitors, creating a mini-race amongst themselves.

But the top-5 runners battled throughout the entire race, staying side-by-side until the very final downhill stretch.

In the end, Anthony Rotich was the first athlete to cross the finish line in 27-minutes, 31-seconds to capture first place in the 47th annual running of the event.

Rotich, who gained American citizenship in March, was the first American to win the race since Danny Gonzalez did it in 1995.

The weather conditions were a typical cool, 60 degrees and some of the morning fog lingered during the race, which Rotich said was the perfect setting for him.

“I felt good from the start so I just started really fast,” said Rotich, who competed in the Wharf to Wharf for the first time in his career.

However, it wasn’t an easy win for the 28-year old Army Reserves member. He was behind Kenyan Simion Chirchir, 25, who finished in second place in 27:33.35, for just about the entire race.

Chirchir was also slightly ahead of Eritrean Amanuel Mesel, 28, who in the end settled for third (27:33.82).

Rotich, who was a three-time NCCA Division I champion in the steeplechase, said he’s normally used to racing in shorter distances, like up to two miles.

Rotich said he felt like he started to pull away from the pack with about 800 meters to go and felt like he had the race in the bag at the quarter mile mark.

“I was just trying to hang with these guys,” Rotich said. “If I can hang after five miles, with one mile to go, that’s my event and it’s going to be hard for somebody to hang with me in the last mile.”

Rotich mentioned the bands along the route were also a huge motivator throughout the race.

“Everywhere you go you hear someone singing and there’s a lot of fans,” he said. “I’ve never ran in a race where they cheer you from start all the way to the end…It was really fun.”

Kipruto said he was well prepared for Sunday’s race but a missed flight delayed him from arriving on time.

Kipruto, who stands a little more than six-feet tall, mentioned all of the traveling also took a toll on his back. He said he felt his back started to act up going into the fourth mile and really felt the pain after the fifth.

“It started to feel tight in the fifth mile,” he said.

Kenyan Vicoty Chepngeno won the women’s title after she finished in 30-minutes, 03-seconds. The 26-year-old was four seconds shy of tying Caroline Rotich’s women’s course record of 29:59, which was set last year after winning the women’s title.

However, Caroline Rotich was not listed on this year’s elite roster.

“I was just trying to go out all even and not kill it on the second and third mile, and then go in hard the last three (miles),” McBroom said. “Also just trying to stay in the pack of people I was around and pass people if I can.”

McBroom, who is part of the Santa Cruz Track Club, said her plan going into the race was to take it easy during the first three miles, which are the two hardest miles for her.

McBroom said it’s a difficult course for her to run because some of the roads are deceivingly not flat.

“Nothing is really flat,” she said. “You have to conserve so you can hammer the last two miles.”

It’s been four years since McBroom first competed in the race and is now familiar with the course, especially at the five-mile mark where the course drifts through the local seaside streets of Capitola and to the big downhill finish into the village.

“In that last mile it was just trying to hold on and keep that pace, not to go faster, waiting for that downhill moment to kick in,” McBroom said.

Editor’s Note: This article will be published in the August 2 edition of the Register-Pajaronian.