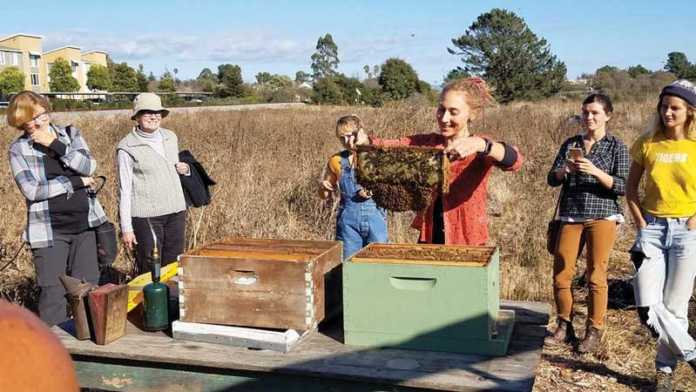 What the buzz is all about

During the winter of 2006-2007, beekeepers across the country began noticing a steep decline in bee populations.

It was Colony Collapse Disorder: a phenomenon in which a large percentage of a hive’s worker bees disappear, leaving behind their queen and a handful of bees to care for everything. Often, the hive will eventually perish.

Emily Bondor of Santa Cruz Bee Company thinks that the collapse which occurred a little over a decade ago is what kickstarted a sort of “beekeeping renaissance” in North America. People began noticing the inactivity and decline of honeybees and were inspired to take action.

“I think that prompted the whole ‘Save the Bees!’ movement,” she said. “It started gaining momentum and so people became interested in getting involved in beekeeping themselves.”

Bondor, who grew up in New Jersey before moving to the Bay Area in 2011, first began working with bees through the World Wide Opportunities on Organic Farms program. She was lending a hand at an apiary (bee habitat) in Maui, Hawaii, where she became interested in the practice.

“It’s definitely a niche market,” Bondor said. “I saw in it an opportunity to create a unique career.”

Three years ago Bondor founded the Santa Cruz Bee Company. With support from Rob Keller of the Napa Valley Bee Company, she began reaching out into her community, promoting what she calls “regenerative beekeeping.”

Bondor says the term basically means finding ways to support the bees naturally, by letting them live as close to how they would if humans weren’t interfering. No pest treatments are applied. Migratory beekeeping (moving the bees to try and yield more product) is avoided.

“When it comes down to it, bees will always be the best beekeepers!” Bondor quipped.

The Santa Cruz Bee Company offers a number of consultations and services, from swarm relocation to hive management, and works with various organizations such as the Homeless Garden Project. The company’s main hive is located at the organization’s location in the west side of Santa Cruz.

“My main goal is educating people,” Bondor said. “Newbie apiarists will get so excited, and can easily do harm without meaning to.”

This time of year, Bondor says, are when bees begin “waking up,” becoming more active and swarming — a natural reaction to reproduction. She’s been steadily getting more calls every day for assistance.

Since Bondor is still working alone, she admits it can get overwhelming.

“At the moment, I’ve got a lot going on, but I’m not quite making enough money to hire someone else,” she explained. “Things are getting busier. A lot of this job is learning how to stay organized!”

For new or prospective beekeepers, Bondor has plenty of advice to give, the main one being: do plenty of research.

“Spend about a year getting well-versed in keeping honeybees,” she said. “Find reliable sources. Learn about bee biology. Pay attention to the environment, where you live. Find a local beekeepers group, or a mentor you can work with.”

Getting stung, Bondor says, is also an important rite-of-passage, especially if you are unwittingly allergic.

“It’s always smart to keep some Benadryl on hand,” she admitted.

Despite her busy schedule, Bondor insists she wouldn’t have it any other way; that working with bees has become its own reward.

“It’s just incredible how these creatures work together,” she said. “The teamwork they have to survive and create a life for themselves. It’s amazing.”