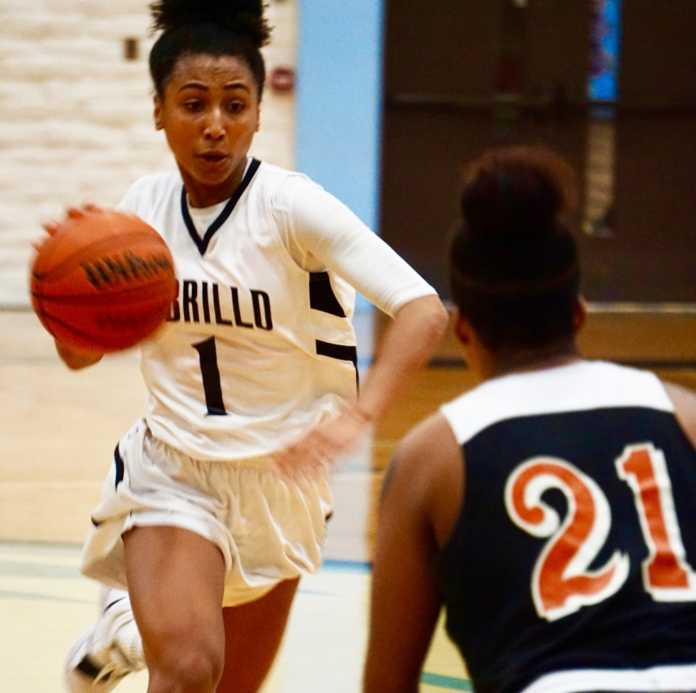 APTOS — The year was 1979. Disco was peaking, sequin jumpsuits were all the rage and the Cabrillo College women’s basketball team entered the season as defending conference champion.

History seems to be repeating itself.

Much to the delight of head coach John Wilson, Chic’s hit song “Le Freak” echoed off the walls of the Adobe Palace during a recent practice, much like it may have 40 years ago when it was the top jam on the Billboard charts. And Cabrillo, like it did four decades ago, was diligently working on its conference title defense.

The Seahawks won a piece of the Coast Conference South championship last season, sharing the honor with the Foothill College Owls.

“We would like to remove that ‘co’ from our title this year,” said sophomore guard Teal Maixner. “We want to win it outright.”

As Wilson and his flock of Seahawks cycled through shooting, passing and defensive drills during their recent practice, there was an air of confidence, a grooved ease both with each other and with the target they now wear on their backs as defending champions. Players seem to know their roles and are embracing them, trust and timing is being built rep by rep. It’s a confidence grounded in solid reason.

“Every one of these players was one of the best players on their high school team or close to it,” Wilson said. “There’s no reason this team can’t repeat given the talent they have.”

At the top of the Seahawks’ deep pool of talent: sophomore transfer Heleyna Hill.

Opponents who have faced the star guard this season have described her as potentially the best player in the state. One opponent went so far as to call her “masterful.”

Standing at 5-foot-6, Hill is a scoring machine capable of taking over entire quarters with slashing layups, back door passes and a deft shooting touch. Prior to suiting up for the Seahawks, Hill, a Santa Cruz native, went to high school at Archbishop Mitty where she distinguished herself as a four-year varsity starter at one of the state’s premier program’s, winning multiple league and CIF titles.

Hill attended NCAA Division I San Jose State for a year where she was on the basketball team, but struggled to find playing time, motivating her to seek opportunities elsewhere.

“I had a scholarship but I barely played at all,” Hill said. “I didn’t want to sit out, I wanted to go somewhere where I could be on the court.”

One of the best offensive players in the state, Hill averages 24.8 points, 4.9 assists, 4.7 rebounds and two steals per game. Hill is currently ranked second in the state in points scored per game. Her arrival helps offset the loss of last season’s conference MVP and second team all-state selection Pauli Pappas.

As conference play tips off, Hill knows she has a target on her back as opposing coaches are designing entire game plans to neutralize her. During a recent preseason loss to Butte College, Hill found herself under constant pressure, often times having to fight through double teams and trap plays limiting her to just eight points.

Other teams around the Coast Conference South may look to replicate that strategy, and it remains to be seen if Hill and her teammates can adapt.

Around Hill orbits a team of capable role players sourced from the rich local women’s basketball community. It’s no accident that nine of the 10 women on this year’s roster are from Santa Cruz County.

“I really want to get local talent,” Wilson said. “It puts more people in the stands. It’s a community college, I feel that it’s about the community so if we can get as many players locally as possible… Some times  we have two or three generations come to the game because the kids are local. But we love outside players as well, because it adds to our community, and helps us build a stronger team.”

This season’s only out of towner, freshman guard Drue Chapman (5-foot-7), hooped at South Lake Tahoe High before trading in the slopes for the shore.

Freshman Michaela Thornton (5-foot-9), a scoring threat, Soquel alumna and middle school teammate of Hill, rounds out the roster. Listed as a guard on the team website, Thornton seems to fill more of a swing forward role providing an inside-outside scoring threat from the wing (10.3 points per game).

This is not a tall squad. At 6 feet, Miller is the tallest player on a team with an average height of 5-foot-6.

“We might be at a disadvantage against teams with bigs,” Wilson said. “Bigs that are in the six foot range that are real physical, those might be the teams that cause us the most trouble.”

Miller is an able rebounder (8.6 boards per game), but truly shines as a defensive stopper when opponents attempt to drive the lane. A dominant shot blocker since high school, Miller is one of the most prolific in the state with 29 blocked shots already tallied this season. Miller has 87 career blocked shots at the junior college level.

“I am more defensive,” Miller said. “That’s where I stand out the most, in my opinion.”

Johnson leads the team in rebounding and has proven that she can be a double threat by aver-aging a double-double (10.9 points, 10.3 rebounds per game). Her physical play in the paint complements well with the back to the basket style of Miller, establishing a formidable front court.

After decades of irrelevance, Cabrillo is looking to become a regionally sourced powerhouse by dominating conference play.

With Hill at the tip of the spear flanked by Miller, Johnson, Maixner, Quintana-Martin and Thornton, the Seahawks have all the looks of a repeat conference champion.

The Seahawks begin their conference title defense tonight in Salinas at Hartnell College at 5:30 p.m.