A plea for cyclists

A plea for cyclists

This message is asking drivers to please consider the safety of cyclists in our communities. Think about how you feel if you hit a bike rider and maimed them for life or they died. It’s not a fair contest. Cyclists always lose. Over 800 cyclists die in car-related accidents annually, and there are more cyclists than ever and more cars. Drivers and cyclists must watch out for each other, and riders need to follow traffic laws. They’re subject to California DMV rules and have a right to be on the road. Yes, some ride like 5-year-olds, the wrong way on streets, cutting between cars or worse. Most don’t. Drivers need to also be aware that cyclists very often must avoid broken and cracked pavement as well as debris (rocks, broken asphalt, glass, gravel, sand and limbs and leaves) while riding, which drivers wouldn’t notice. Many roads have no shoulder, much less a bike lane. So they need to use the road too.

Lastly, think again about how you’d feel if a rider were injured by your actions. Please watch for, respect, and take care when driving near cyclists. Give them space, not a horn blast or nasty language. They may slow you for a few seconds. But that’s not worth your rage. They’re your neighbors and they’re vulnerable.

That could be me

When I was playing football in high school, I hit my head such that I couldn’t even remember my name, but figured it out when people gathered around me and asked, “Are you okay, Bob?” (I was in a daze for days but recovered without permanent damage.)

Years later, some insight came to me when Christopher Reeve suffered major paralysis and was forced to change a lifestyle. More recently, I began interacting with someone who was injured in an unfortunate incident when he was only 3 and has been limited ever since. I certainly got very, very lucky to avoid a potentially life-changing experience and to still be able to physically compete with anyone. It makes one so very thankful that they can still think and walk on their own.

Anyone at any time is only a simple accident away from losing one’s mind or body part. Some may be oblivious until it happens to them. It also brings up the present highlighted attitude on the color of one’s skin. What some must have gone through and why would I want to be any part of making life more difficult for anyone than need be, just because of a superficial difference in skin color? That could be me. I could just as likely been born of any color and have to tolerate injustices.

Let’s be appreciative of life and appreciate all those around us.

Thank you, Mr. Dutra, for your opinion piece imploring Watsonville residents to “…stand in the face of hate and injustice. We need to be the voice for those who are being silenced.”

I would just remind readers that Blacks are not the only victims of oppression and racism, and that Watsonville has a long history of both. (Most of the following information comes from “Watsonville Yesterday and Today” by Betty Lewis.) Here are a few highlights:

It began with “Judge” Watson selling off parcels of the Rodriguez ranch that didn’t belong to him.

Then, in 1876, “Chinatown,” the neighborhood including Union and Maple Streets, was burned down by racists and the Chinese were forced across the bridge to Pajaro. This newspaper reported that “Chinese immigration is a most serious evil.” (Even though they had been imported to build railroads and pick fruit.) Then the Pajaronian opined that “The removal of Chinatown is progressing as rapidly as could be expected. The Mongolians have to go and they are going.” The new Chinatown, called Brooklyn (the street still remains in Pajaro), was burned to the ground in 1926 and the property sold off to whites.

Currently, thousands of farmworkers doing the backbreaking labor that is the foundation of Watsonville’s economy, are living in fear of deportation. In spite of City Council support and the help of groups like Pajaro Valley Rapid Response, thousands of families have been forced to have “the talk” with their children.

“The talk” goes something like this: “If we don’t come home from work in the fields, go to your aunt’s house. She will take care of you. If we get deported and can’t come back, just remember that we
love you.”

These children (who I taught for 35 years) see our president on TV saying hateful things about them, they see children that could be their cousins in cages, and they know that armed men are stalking their parents. I can only imagine their nightmares.

I believe in following the law, including immigration laws, but Watsonville can’t have it both ways. Either the undocumented leave—and watch the Watsonville economy that of the entire country collapse—or the undocumented should be able to come out of the shadows. Currently, they have zero civil rights. They are, in fact, silenced, and as you say “We need to be the voice for those who are being silenced.” 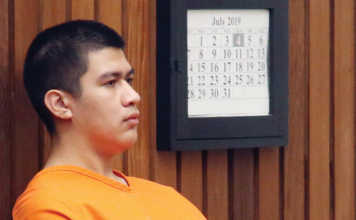