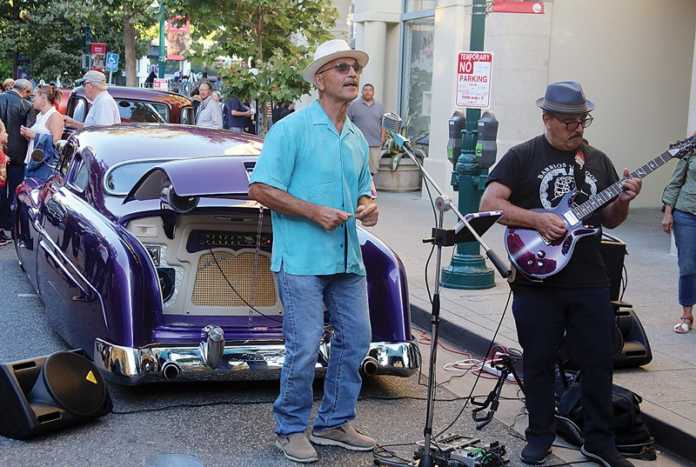 Art tour on the move

WATSONVILLE — The monthly First Friday Art Tour is gaining traction in Santa Cruz, especially over the summer when blended with the Cooper Street Festival.

The casual evening event, organized by the Santa Cruz Museum of Art and History (MAH), is designed to throw the doors open to area galleries, museums, exhibits, live music and kids’ activities, all of which are free to the public to help people plug into local cultural goings-on.

On Aug. 2 the event titled “Sculpture on Wheels,” an open-air showcase on a closed-down Cooper Street to give the public an up-close view of some of the county’s most buffed out, customized vehicles.

Spearheaded by Executive Director Nane Alejandrez of Barrios Unidos, the event drew about a dozen vehicles.

The evening was punctuated with live music in several venues, including out the truck of a 1950 Mercury owned by Phillip Retamoza of Watsonville. While playing a customized electric guitar that matches his car, Retomoza treated those gathered to his blend of tunes that emanated from his car’s built-in sound system.

“I loved the crowd that day,” he said. “I’m just blessed to be able to inspire people, especially the young ones.”

“I play at car shows, parties, weddings and all kinds of outdoor events,” he said. “I’m also in the eight-piece rock and blues band, Tortilla Soup.”

He started playing when he was 10 thanks to the influence of his older brother who often played his guitar in the family garage.

“Then I heard Carlos Santana and that did it,” he said. “For me, it’s a passion.”

“They were so well behaved, and such an appreciative audience,” Retamoza said. “It meant a lot to them, I could tell right away. It was a great way to give back.”

Retamoza said he’s found that the First Friday event is a great way to connect with the community and is happy to see so many folks from Watsonville in the crowd.

“There were people out there from all over the world that had never seen anything like it before,” he said. “They were out there taking videos and photos with their cellphones. I’m like a kid in a sandbox. Music kept me out of trouble.”

Another car enthusiast in the show was Steve Galvan of Moss Landing. He rolled up in his 1938 Chevy coupe pickup with a chopped top and reverse suicide doors. The gunmetal gray matte finish and customized plates that read, “Watsonville, CAL, 1938” drew lots of attention.

“I just got back from Reno where I showed in the Hot August Nights,” Galvan said. “It’s just a lot of fun to show this Chevy. The car has a modern 250 with four-speed automatic.”

First Friday occurs on the first Friday evening of every month and has a block party-like vibe. It’s a countywide event with activity not only in downtown Santa Cruz, but also River Street in the Old Sash Mill and the Tannery Arts Center. Other venues also open up in Soquel Village, San Lorenzo Valley, Felton and Boulder Creek. Many of the venues are designed to be walkable. Much of the event revolves around MAH, 705 Front St.

Sept. 6 marks the last Cooper Street Festival of the summer from 5-9 p.m.