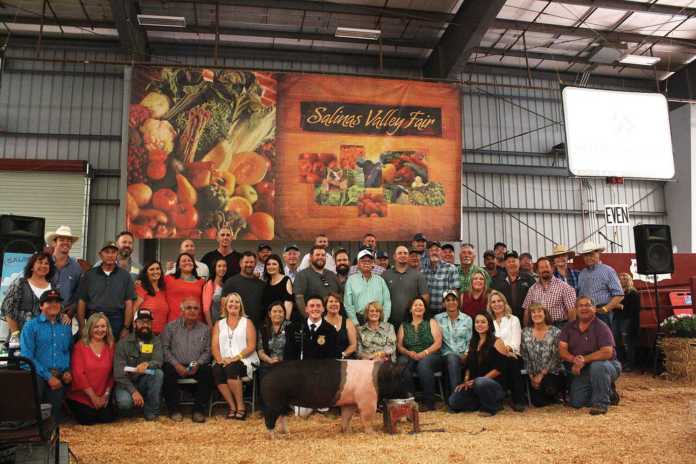 KING CITY — With the theme “Cowboy Up and Wind Down,” the 2017 Salinas Valley Fair brought thousands of visitors to South County and featured the annual Junior Livestock Auction, which raked in $2.1 million from the sale of 950 animals.

He raised the fair’s heritage animal, which sold for $371 per pound.

“This is the second year in a row that he is a returning applicant,” said Foundation scholarship chairman Ralph Rianda. “He actually applied a year ago, didn’t get the scholarship and came back. That’s something for 4-H and FFA-ers to think about for our next year’s scholarship applications that will come out in October.”

As the scholarship winner, Umbarger received a $2,500 scholarship that he can use for his continued education at Cuesta College in San Luis Obispo, where he plans to earn his associate’s degree in justice. Umbarger plans to transfer to California Polytechnic State University, San Luis Obispo, to major in forestry and natural resources.

Every year the Salinas Valley Fair board awards an individual or couple who has helped to put on the fair, and this year’s recipients were George and Angie Young. The Youngs own A&G Pumping, which takes care of watering down the Stampede Arena grounds and are donors of the fair, helping to provide services and support for the event year-round.

“It’s a good honor,” George said. “What we do is all for the kids. It’s not just one person, it’s multiple people who help the fair, and that’s what makes it great.”

The Junior Livestock Auction brings together not only auction buyers from throughout the Salinas Valley, but also FFA and 4-H members from Gonzales to King City and from Bitterwater to Templeton.

Isaac Gomez of Greenfield 4-H has been a part of 4-H for three years and brought a Yorkshire named Pirate because he has a patch on his eye.

“It’s been really fun raising him, and I encourage kids to raise animals,” Gomez said.

Daniel Gomez, also from Greenfield 4-H and Isaac’s brother, also raises pigs and this is his first year. Daniel has raised lambs in the past. Daniel said he named his pig Ham because of what happens after the auction sale.

“I got really lucky with my pig this year because he was 260 pounds, and that’s the limit of how much he could weigh,” Daniel said. “I am grateful for my parents who let me do this and for helping me out with all my projects that I’ve done.”

Mari Horwath and Natalie Eubanks also raised swine projects for Chualar 4-H. Horwath has raised eight hogs so far. Eubanks just raised her fifth pig for the Salinas Valley Fair and she likes participating in the event because she learns something new every time and gets to meet new people.

“I like doing 4-H because every time you show you get better and better,” Horwath said.

Celeste Villareal raised a pig for Mission 4-H and is in her fifth year of raising animals. Villareal is involved with 4-H because of her family and her brother.

Jaylen Calbrow, a member of Gonzales 4-H, shows pigs because they are fun to hang out with and it teaches her responsibility.

SAMANTHA BENGTSON - June 21, 2022
In the fall of 2013, Cabrillo College celebrated the opening of a remodeled and expanded Science, Technology, Engineering and Math (STEM) center in Aptos. After...