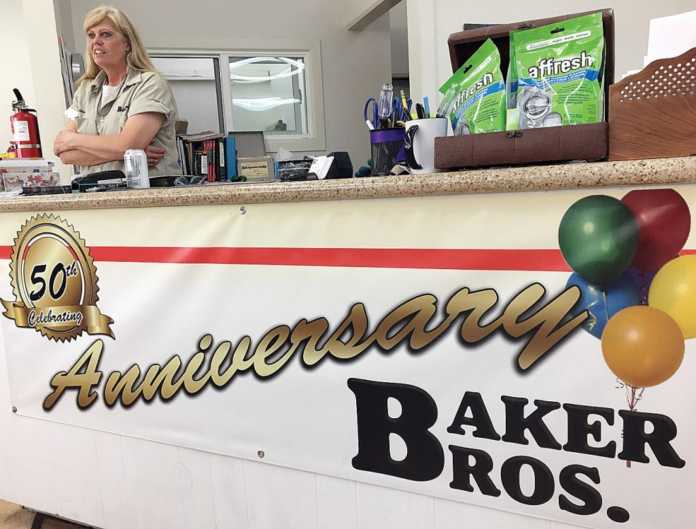 WATSONVILLE — Baker Brothers Furniture & Appliance, a long-standing pillar in the local business community, is celebrating 50 years in the same location.

Though they’ve reduced their square-footage from 23,000 to 3,000-square feet, owner Debbie Baker said a blend of longtime repeat customers, word of mouth and new clients continue to pay the bills and keep her showroom floor full of modern appliances and furniture.

“I’m delighted to be celebrating 50 years of business at the same location,” she said. “Like so many of the businesses around this area, there are many of us that are still here and we make up a big part of our community. People keep coming back. We’re just so thankful for our customers.”

The business got started in 1969 when Bob Baker opened at 55 Brennan St. in a former Buick automotive dealership. Around 1974 George Lee opened Lee’s TV at 31 East Fifth St., a building that is adjoined to the Brennan Street space, connected by a sliding metal fire door. That business lasted about a year when Debbie’s folks bought it and it became Alex’s TV and Appliance. Now married, Debbie and David Baker (Bob’s son) bought Alex’s TV and Appliance in 1998.

The business underwent a major renovation and modernization in 2005-06. Around that time they won the Business of the Year award from the Pajaro Valley Chamber of Commerce.

In a stunning blow to the business hub of the Pajaro Valley, David Baker died in 2011. However, Debbie has kept the shop up and running and continues to play a vital role in the community.

Shaz Roth, CEO of the Pajaro Valley Chamber of Commerce and Agriculture, praised Baker for her generosity to the community through groups like the Rotary Club, where she recently donated a refrigerator to replace a broken one in the Rotary’s Burger Booth.

Though she’s seen several businesses come and go downtown, Baker said she feels fortunate to be a part of the ebb and flow of the downtown scene. Baker’s sister, Carolyn Flores, said she regularly helps with running the business.

“We used to work in here as little kids,” she said. “I’m just glad to be able to lend a hand.”

Baker said she still feels lucky to be a part of the Pajaro Valley business landscape.

“It’s still a great little neighborhood of businesses that are almost all family-oriented,” Baker said.