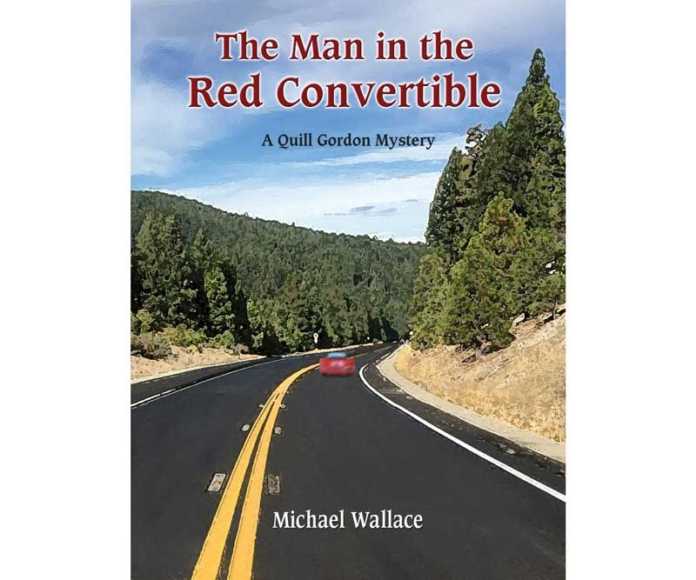 WATSONVILLE—While Michael Wallace was serving as Managing Editor for The Pajaronian newspaper in the 1970s and 1980s, he learned a thing or two about getting to the bottom of a story.

That investigative instinct eventually made way for a different kind of writing career: as the author of a series of mystery novels.

“I’ve always loved mysteries… how you piece things together, making order out of disorder,” Wallace said. “It’s a lot like being a reporter.”

Wallace’s seventh volume in the Quill Gordon Mystery series, “The Man in the Red Convertible,” was released in June. The story follows the case of a young girl who is picked up by a stranger in a red convertible while alone handing out pamphlets. The stranger promises to take her on a getaway to San Francisco—but instead she is kidnapped.

“The story had its origin in an actual experience,” Wallace said. “I was coming home from a fishing trip in the mountains, when I pulled into a rest area in the middle of nowhere and was surprised by a young woman — the only other person there — handing out religious pamphlets. I was struck by the strangeness of doing that sort of work in a place with so few customers… by the danger inherent in a young woman being alone… where there’s no telling who could drive up and how far away help might be.”

The girl’s mother enlists the help of protagonist Quill Gordon to find her daughter. Things become more complicated, and clues eventually lead them to the highest levels of power in San Francisco.

“I will say, there are a lot more twists and turns in this book,” Wallace said. “I felt more inspired than ever with the plot.”

Wallace began writing the series not long after he left his position at The Pajaronian in the early 90s. He held onto the story for years, and finally released the first novel as an e-book on Amazon in 2012.

“Amazon made it possible to self-publish,” he explained. “This allowed me to get my work out there on my own terms.”

But Wallace said he is definitely still a lover of “real” books, which is why he always gives readers the option to order print copies.

“I’m grateful to Amazon, but I’d rather have a paper book to hold in my hands,” he said. “It’s so important to support local bookstores.”

Wallace will be at Kelly’s Books, 1838 Main St., Watsonville on Saturday from 1-3 p.m. The event will include a book signing with Wallace and one-on-one discussions.

“Kelly is so supportive,” he said. “She’s great and has been there every step of the way.”

Wallace added that “The Man in the Red Convertible” is dedicated in the spirit of Herb Caen, the Pulitzer-Prize winning columnist for the San Francisco Chronicle.

“Herb Caen’s San Francisco is gone now, but this book, which takes place a year after his death, attempts to capture the last vestiges of it,” Wallace said.