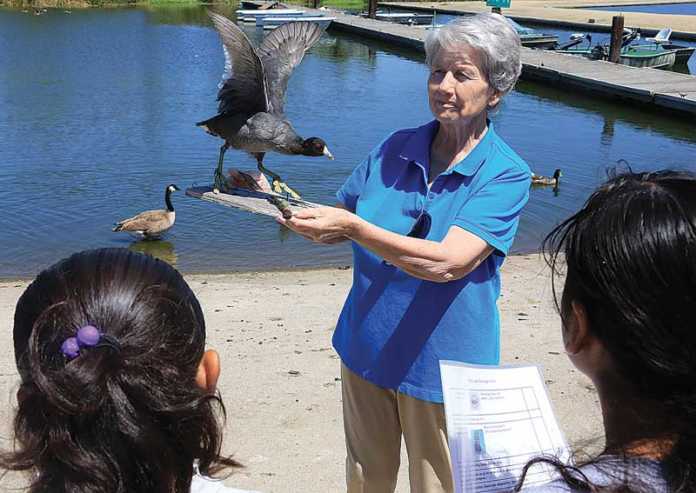 The guardian of Pinto Lake is gone

WATSONVILLE — A pillar in the Watsonville community has died. Pat McQuade, the park concessionaire at Pinto Lake City Park, a highly visible, helpful and deeply caring person, died Sunday, according to people close to her at the park.

Though she departed her park job for a handful of years, McQuade, 73, returned and put in about 30 years overlooking the park and the lake. Her advanced understanding of photography and nature led her to produce a unique production of collectible photo ID bird cards that she commonly handed out for free, especially to visiting young students, with hopes of bettering their understanding of their natural surroundings.

“She loved the park so much,” said Dan Carrillo, owner of Pajaro Valley Printing. “I’ve had the privilege to work with her over the past 10 years. She was an awesome person — straightforward — an honest, good person. That was what she wanted out of life — to be direct and sincere. I learned a lot from her. She was so honest, sincere and simple. Be up front and keep on top of things — that was who Pat was.”

At her post at the park, McQuade was in charge of renting boats, registering RV guests, maintaining watch over the grounds, leading tours, keeping tabs on boats going onto the lake, monitoring a website that featured the natural world of the lake, setting up reservations for parties and such, photographing birds and other wildlife at the lake, and greeting visitors, among other duties.

Her direct but soft-toned demeanor made for a welcome and firm manner for how the park was run. Over the years many visitors have reported that they appreciated how the park was kept, with its alcohol-free rule and family-friendly nature.

“Pat was such a loving advocate of this park,” said Jackie McCloud, Watsonville environmental projects manager, who was visibly shaken by the loss. “Pat cared so much about the park, the lake and the kids that came here. You just don’t find people like Pat very often. She cared so much about people learning from this place.”

“Pat joined the Soroptimists in 1995,” Rather said. “She was president in 2001. I know she was a wonderful photographer; she was very interested in birds and was a big advocate of the wetlands. I’m just so sorry to learn of her passing. She was a very caring person.”

Just this year McQuade finished penning a novel, “Joe and Marian,” a story about her family and the coal industry in West Virginia where she was born, raised and educated. She was also the layout artist for the newsletter of the City of Watsonville, “Our Town,” and a docent at the Elkhorn Slough Reserve. As a young woman, McQuade was the first female to windsurf all the way around Alcatraz Island in San Francisco Bay.

Memo Campos, parks maintenance II for the City of Watsonville, said he worked alongside McQuade for about 30 years as part of his duties in maintaining the park.

“Pat was a straight-ahead person and she let you know just how she felt,” he said. “I learned a lot from her over the years and I always liked her. She worked so well with the kids that visited here. Pat was a tour de force. She was tough but she had a good heart. I was very surprised to hear that she is gone. I could tell, over the last six months, something was going on with her health, but she was a very private person. It’s a sad loss.”