Editor’s note: This is the fourth entry in a series of interviews with candidates running for office in the upcoming local elections. Interviewees will include candidates for the Watsonville City Council, the Pajaro Valley Unified School District Board of Trustees, the Pajaro Valley Water Management Agency and the Cabrillo Community College Governing Board. For information on all candidates and offices visit votescount.com.

When Aurelio Gonzalez was voted into office in 2018 to fill the District 2 seat vacated by Oscar Rios, he had high hopes of accomplishing a long list of objectives in his abbreviated stint on the City Council.

Two years later, Gonzalez, 58, can indeed point to several accomplishments from his short time as one of Watsonville’s seven decision-makers. The retired construction worker has been a champion for the arts and local artists, spearheaded efforts to expand park space and fought to defend renters during the Covid-19 pandemic.

In the art realm, he helped bring the Santa Cruz Symphony to the City Plaza last year for a free concert titled “Music for the Heart.” He also helped organize a booth at last year’s Santa Cruz County Fair that showcased Watsonville artists’ work.

And in housing, Gonzalez has been a staunch supporter of renters—twice this year he helped pass a moratorium on Covid-related evictions—and affordable housing projects.

“People say, ‘Aurelio, you don’t toot your own horn enough,’” he said. “I just don’t think I should because it’s not about me. City Council, getting things done, is a ‘we’ thing.”

If reelected, Gonzalez, now the President of the Pajaro Valley Arts’ Board of Directors, said he would continue his work with local artists and organizations in hopes of establishing a cultural center that would serve as a haven for the area’s visual and performing artists.

He would also continue marching toward his “dream” of inking a deal with PVUSD to open up E.A. Hall as a community park with an all-weather surface track. If Gonzalez were to win the Nov. 3 election, he said two of his largest concerns would be finding the funding for the Pajaro River Levee project and the numerous water and sewage infrastructure projects.

As both the youngest and the lone female candidate, Vanessa Quiroz-Carter considers herself the “underdog” in the race for the District 2 City Council seat. That moniker is one she knows all too well as a Watsonville native who as a child was told she had to leave her home city to make something of herself.

Now back in Watsonville with college degrees from UC Berkeley (English literature) and Cal State East Bay (Communication) in her back pocket, Quiroz-Carter wants to give the city’s promising young people a reason to stay home and use their talents to rebuild the Pajaro Valley.

Quiroz-Carter, 33, has no experience in politics and has never served on a board, commission or committee. That, however, has not stopped District 2 residents from throwing their support behind the newcomer, she said.

“There are folks in the community who are excited about my campaign and are willing to help,” she said.

Quiroz-Carter, an adjunct professor at Hartnell College that has worked with a handful of nonprofits in the past, said she decided to run because the city is lacking leadership. The lack of progress and investment in programs for young people, street safety and small business was also troubling, she said.

If elected, she said she would try to bridge the gap between city leaders and the community—a concern she said she encountered while talking to constituents on the campaign trail. She also wants to make sure Watsonville is exploring all of its funding sources so that the City is getting its “piece of the pie.”

“For me, [being on City Council] is another way of serving the community and hopefully being able to represent what the community really wants and having a say in that,” she said.

She holds endorsements from Planned Parenthood Mar Monte, the Democratic Women’s Club of Santa Cruz County and a handful of community members, including former Mayor Manuel Bersamin and Pedro Castillo.

Quiroz-Carter: The Covid-19 pandemic has been taxing on Watsonville’s economy and, in turn, the City of Watsonville’s sales tax revenue. Quiroz-Carter said she would try to spur an economic rebound by connecting City leadership and small business owners to identify the restrictions in zoning and permitting that are hindering growth and scaring people away from starting small businesses.

She said she also wants to start grassroots events such as a small business Saturday or monthly art walks as a way to spark local reinvestment and community involvement.

“I want to ask business owners ‘what can we do to support?’ I think conversation is the one piece that’s really important,” she said.

She said Watsonville’s biggest strength is its “small-town feel,” and its “tight-knit community” that showed its generosity and willingness to help during the CZU August Lightning Complex fire. She said she wants to combine those traits to help bring new programs and opportunities for young people and local artists.

GONZALEZ: Gonzalez said he plans to be fiscally conservative until the City starts to rebound from the Covid-19 pandemic. But once the economy begins to stabilize, he said he would push for the City to rebuild around its artists, parks and recreation programs and downtown corridor.

Gonzalez said he wants to see the City reinvest in its “underappreciated” artists by helping them understand how to make a living off of their work. He also wants to use their abilities as the centerpiece of Watsonville’s downtown revitalization.

A key part of that revitalization, he said, will be community involvement in the Downtown Specific Plan, a document that will serve as a blueprint for the future of downtown Watsonville by setting guidelines for housing, parking and economic development, among other things.

The City hopes that plan will help spark development by enticing trendy bars and restaurants to relocate into the once-booming corridor, bringing in needed sales tax revenue and keeping some of the area’s promising young professionals home.

“That’s one of the major reasons I ran, to bring in things for people to do—we have to give them options,” Gonzalez said.

Gonzalez said bringing a major grocery store into downtown would be a big step to jumpstarting the area’s rebirth. Another significant development, he said, would be the creation of the Coastal Rail Trail, a 32-mile transit system that seeks to connect the northern and southern reaches of Santa Cruz County. That, Gonzalez said, would make the city greener and allow tourism to grow.

“If we’re going to solve these problems, we have to think differently,” he said.

The Parks and Community Services Department, he said, should also see a large reinvestment when the budget begins to stabilize so that people of all ages can have access to much-needed enrichment programs currently lacking.

GONZALEZ: There is no doubt that Watsonville needs more housing, Gonzalez said. But the compact city—measuring in at roughly 6 square miles—needs to take a balanced approach when deciding what kind of housing it will allow, he said.

“We can’t just put all market-end homes or condos or apartments. That’s not going to work,” he said. “We need to find that balance, and to do that I think the whole community needs to be involved in how we’re going to develop our downtown.”

One slice of housing stock that needs to be buffed, Gonzalez said, are those in the price point of young professionals who might be making too much money to qualify for low-income housing but are not making enough money to move out of their parents’ home and buy their own house or rent an apartment.

That conundrum, Gonzalez said, is forcing the area’s best and brightest to leave to more affordable cities.

“We need to create plans not just for the next year, the next two years, the next four years but, really, for the next 10, 15, 20 years, if we want to have something sustainable,” she said.

QUIROZ-CARTER: Quiroz-Carter said one of the largest threats to public safety is the speeding and unsafe driving that occurs throughout the city, which has ranked near the bottom of the state in pedestrian safety for cities its size. In District 2, she said, her neighbors are afraid to walk their dogs and do not let their children play outside.

“If folks are scared to go outside because people are driving crazy, that’s a big issue for me,” she said.

She also applauded the creation of the Ad-HOC Committee on Policing and Social Equity, which will dive into the community’s relationship with the Watsonville Police Department. She said she hopes those conversations will truly be a reflection of the community’s feelings and be as inclusive and possible.

She said Watsonville should follow the lead of the ongoing national social justice movement, and pick and choose the policies and ideas that would help solve the shortcomings present in the community.

GONZALEZ: Gonzalez said he does not plan to lead a movement to defund the Watsonville Police Department, as the majority of its $21 million budget is spent on salaries—that includes officers, administrators and everything else in-between.

“Those are jobs, those are people,” he said.

He did say the City needs to invest in public safety education, something made apparent by the Covid-19 pandemic and the large number of cases that have arisen in Watsonville. 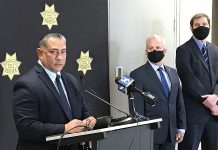 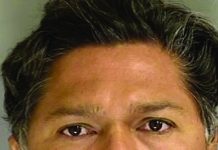 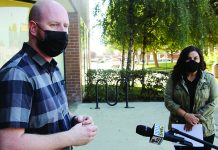 Tarmo Hannula | October 20, 2020
The surfer statue on West Cliff Drive on the west side of Santa Cruz is an ever-changing sounding board for current affairs....