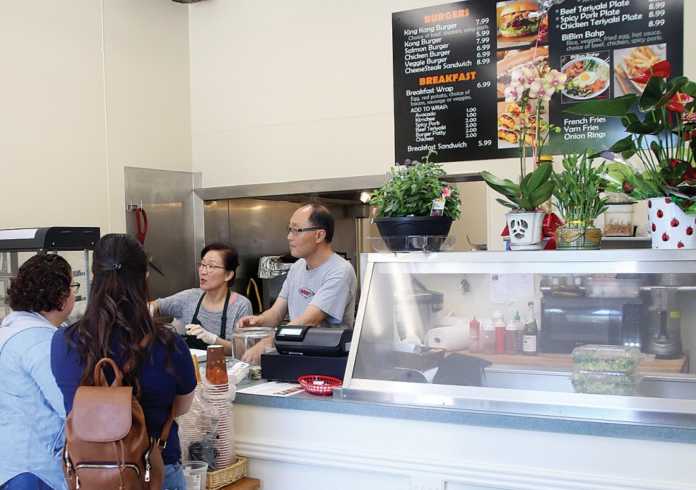 WATSONVILLE — Sang Soon Ahn lost his business three years ago and his home soon after.

But he never lost his drive and determination.

“I lost everything,” Ahn said, “but what are you going to do?”

The short answer: start over.

A change of pace from the bounty of Mexican food restaurants throughout the corridor and city at large, Kong’s has a small but delicious offering of burgers, fries and sandwiches, as well as some Korean dishes such as BiBim Bahp — a heaping plate of rice, veggies, hot sauce and a choice of meat (beef, chicken or spicy pork) topped off with a fried egg.

Kong’s also serves a breakfast wrap and sandwich to go along with freshly brewed coffee, which is roasted locally.

Ahn said he and his wife pride themselves on their friendly customer service and their fresh, homemade dishes and sauces, including their teriyaki sriracha.

“I love my customers, I try to work hard for them,” Ahn said.

That same approach made Ahn a community staple while running Kong’s Market in Santa Cruz for nearly three decades before closing in late 2016.

The market had operated for more than 70 years before shutting down. Ahn took over ownership from Simon Kong in 1992 and kept many of the fundamental elements of the market, including the recipe to the famous egg rolls and the homey feel while adding a few twists like the Kong burger — something that has carried over to Ahn’s new shop.

After losing the market, Ahn did not know how or where he would try to rekindle his business. On top of that uncertainty, he had to find a new place to live after losing his house following financial struggles.

His prayers were answered earlier this year when Pupuseria Marlney’s left El Pájaro CDC’s incubator for a larger location. Ahn for more than a year had looked for other spots in downtown Watsonville, but couldn’t find the right price or space. The newly vacant site was nearly move-in ready, saving thousands of dollars in renovations that could have arisen at a different locale.

“All the equipment was there,” El Pájaro CDC Executive Director Carmen Herrera-Mansir said. “All he had to do was clean it up a little and add some paint.”

So far, Kong’s has been a hit with both its neighbors and the community, according to Herrera-Mansir. The addition of a Korean option in Plaza Vigil has been a “win-win,” she said.

Jack Chacanaca of Las Lomas said he was among the first customers to come through the door on opening day.

“There’s just no other place around that serves great Korean and Korean/American food,” he said. “The burgers here are fantastic. They make a great cheesesteak that I don’t think anyone else makes in the Pajaro Valley. Today I’m trying the beef teriyaki and fries and they’re amazing. I’m pretty sure the word is getting out about this place and people are giving it 5-star reviews.”

Eugenia Renteria, who works in a building next to Kong’s, stopped in Tuesday with a friend for lunch. It was her third visit.

“Their food is really good,” she said. “I’m glad that an alternative to the taquerias has opened up.”

Ahn said most of his customers have come through word of mouth, though he said his 9-year-old grandson has helped him gain more diners by creating a website and verifying his Yelp account. The restaurant currently holds a five-star rating on Yelp and a 4.7-star rating on Google.

Born in South Korea, Ahn immigrated to the United States in 1982 and settled down in the Washington D.C. area where he operated a mini-market. He relocated to Santa Cruz shortly after and bought Kong’s Market.

One of his daughters still lives in Washington D.C. and the other lives in Aptos.

Ahn said he was hesitant to start a business in Watsonville at first, but the community, especially the other businesses at Plaza Vigil, have welcomed him with open arms.

“It’s like my home now,” Ahn said. “I love Watsonville. The people are so nice.”